Brookfield Infrastructure Partners LP’s decision to raise its hostile cash-and-stock offer for Canada’s Inter Pipeline Ltd. to $8.6 billion (US$6.9 billion) has shifted the focus to rival suitor Pembina Pipeline Corp.’s next move as shares in the fought-over midstream company surged.

Brookfield Infrastructure agreed to lift the cash portion of its offer by 2.6 per cent to $20 for each Inter Pipeline share in another push to break up a friendly, all-share takeover by Pembina. Investors opting for stock would get 0.25 of a Brookfield Infrastructure Corp. share, subject to proration. Assuming investors choose the higher value share option, resulting in 68 per cent cash and 32 per cent share proration, Brookfield said its offer would be valued at $21.23 based on Wednesday’s close.

Inter Pipeline shares surged 3.2 per cent to $20.91 at 4 p.m. in Toronto trading for its biggest jump since June 2, while the stock of Brookfield Infrastructure Partners fell 2 per cent to $54.54 in New York.

Brookfield’s latest move puts additional pressure on Inter Pipeline’s board to secure a better deal from Pembina, which has offered no cash and 0.5 of its shares for every Inter Pipeline share. Pembina’s stock slipped 0.4 per cent to $39.25 on Thursday, making its offer worth $19.63. Spokespeople for Pembina and Inter Pipeline didn’t immediately respond to requests for comment.

“We are assuming that Pembina raises its offer in response to the higher Brookfield Infrastructure Partners offer,” CIBC Capital Markets analysts led by Rob Catellier wrote in a note to clients. “We think there is more value to Pembina shareholders if they were to acquire IPL, even at a higher price.” The bank raised its price target for Inter Pipeline to $21.50. 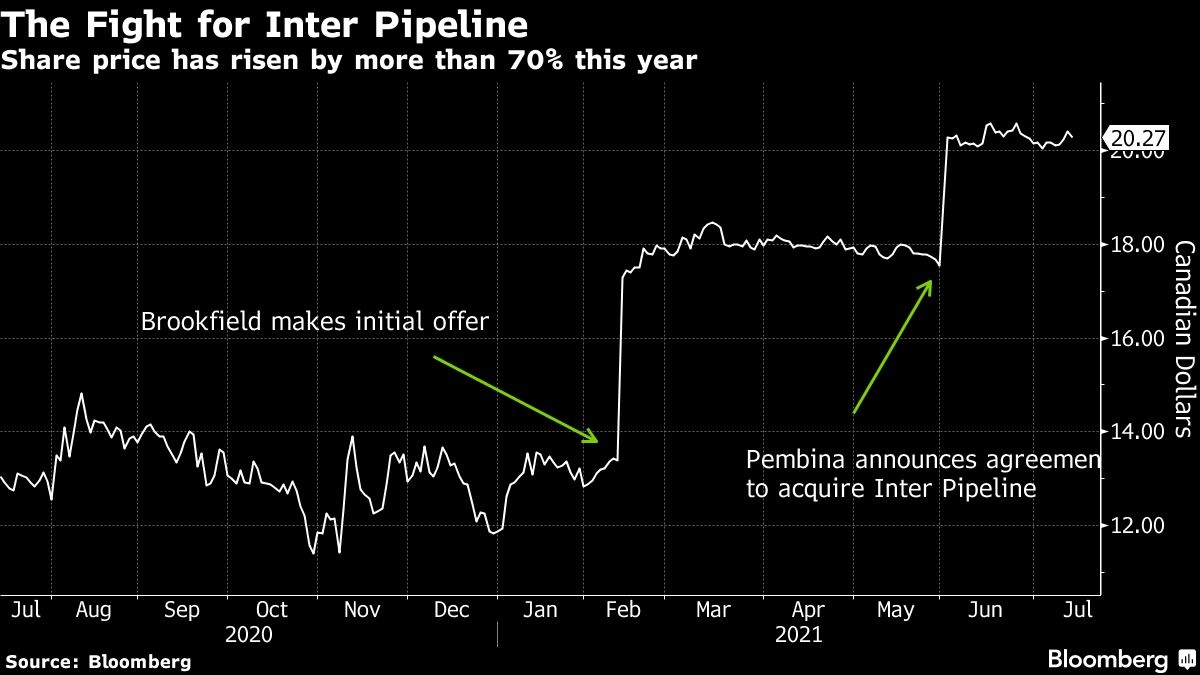 The takeover saga started in February with a $7.1 billion offer from Brookfield that was rejected by Inter Pipeline’s board. The Calgary-based pipeline operator then announced an agreement with Pembina on June 1, and Brookfield has since revised its bid three times.

The merger partners won a partial victory this week. The Alberta regulator ruled that for Brookfield’s bid to succeed, it would have to get 55 per cent of Inter Pipeline shares instead of 50 per cent plus one, to take into account the votes attached to shares tied to the swaps. Brookfield’s own petition was denied. That decision increased the pressure on Brookfield to revise its bid again.