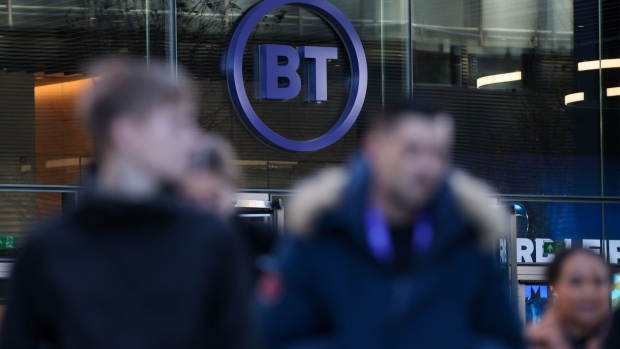 (Bloomberg) -- BT Group Plc is preparing to discover whether tens of thousands of its unionized workers will take part in the first national walkout from the company in more than three decades.

The collapse of pay rise negotiations in April led the Communication Workers Union to ballot more than 40,000 members on whether to take industrial action, the results of which will be announced in London shortly after 4 p.m. on Thursday.

Berenberg analyst Carl Murdock-Smith said he predicts a “strong yes vote,” leading to a scale of walkout not seen at the London-headquartered phone and broadband group since 1987. It would follow rafts of other strikes over pay and conditions across the UK as the cost of living surges.

The labor group aims to pressure Chief Executive Officer Philip Jansen back to the negotiating table. In April, BT increased wages for 58,000 staff by a flat £1,500 ($1,823), equating to 3% for higher pay grades and 8% for lower ones, which is less than national inflation.

“We awarded the highest pay rise we could for team members and frontline colleagues across BT Group; it’s our highest salary increase in more than 20 years,” a BT spokesperson said. “So it’s disappointing that the CWU has decided to ballot for industrial action without consulting its members on the outcome of our negotiations.”

It would be the first BT-wide strike since 1987, three years after it was privatized by Margaret Thatcher, according to BT and the CWU, though smaller localized walkouts have happened as recently as last year.

BT is not alone in its tension with workers. Its biggest rival Liberty Global Plc and Telefonica SA-owned Virgin Media O2 face complaints from the CWU, where staff got a 3% pay rise. On a May earnings call, Liberty CEO Mike Fries told investors the increases were “not nearly at inflation levels” two weeks after he received a package worth $62 million.

A spokesman for Virgin Media O2 declined to comment.

Members polled by the CWU consist of about 30,000 in BT’s Openreach infrastructure division, 10,000 in call centers, and about 1,500 in customer service at mobile unit EE. Any strike wouldn’t take place until after July 14 and its length would depend on whether management came back to negotiations, a CWU spokesman said.

Prospect, a union that represents other BT staff including managers, also “did not accept BT’s pay offer” imposed instead of continuing negotiations, and has been consulting members on how to respond. It’s focused on “getting BT back to the table,” a spokeswoman said by email.

If the walkout went ahead, it’s likely to affect broadband and telephone installations, including signing up new customers. Internet outages could be prolonged because engineers aren’t around to fix them, which could affect millions working remotely as well as harm a long effort by BT to improve its customer service ratings.

Openreach is Britain’s only national operator of broadband infrastructure. Internet providers including BT and its rivals like Sky and Vodafone sell broadband by leasing Openreach’s 197 million kilometers of fiber and copper connections.

At an investor briefing on Tuesday, BT Chief Technical Officer Howard Watson said the company has a “robust plan in place” for strike disruption, so networks can continue working without manual intervention.