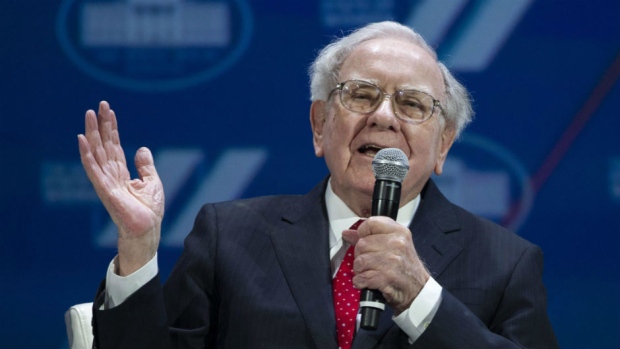 Warren Buffett's Berkshire Hathaway Inc (BRKa.N) on Monday said it has increased its stake in Apple Inc (AAPL.O) by 55 per cent, boosting its bet on the iPhone and iPod maker even as prominent investors like George Soros and Carl Icahn shed theirs.

Berkshire owned 15.23 million Apple shares worth US$1.46 billion as of June 30, up from 9.81 million shares as of March 31, according to a regulatory filing from Buffett's Omaha, Nebraska-based conglomerate.

The filing also said Berkshire cut its stake in Wal-Mart Stores Inc (WMT.N), the world's largest retailer, by 27 per cent to about 40.23 million shares from 55.24 million. Wal-Mart has been in Berkshire's portfolio for more than a decade.

It was unclear whether Buffett or one of his portfolio managers, Todd Combs and Ted Weschler, are investing in Apple.

Berkshire owned more than US$133 billion of equities as of June 30. Buffett is typically responsible for larger investments such as Wal-Mart, while his deputies handle smaller investments.

"They have more of a trading orientation than Buffett, and may view Apple as attractive because the stock appears cheap or may have a catalyst later this year," Jim Shanahan, an equity analyst at Edward Jones, said in a phone interview. "If Warren Buffett is buying a stock, he's probably not going to sell it, or at least not sell for a very long time."

Berkshire dumped about 26 per cent of its stake in oil and gas company Suncor Energy Inc (SU.TO) during its second quarter. It now owns about 22.3 million shares of the Calgary-based company. The move comes less than a year after Buffett's investmnet fund boosted its stake in the oil sands operator by a similar amount.

Share prices often rise when investors perceive that Berkshire has given them its imprimatur, including the 3.7 per cent one-day boost that Apple got in May after Berkshire unexpectedly revealed it had taken a stake.

Icahn in April said he had sold his entire Apple stake, citing concerns about China's policies regarding the company. He later said he would reinvest in Apple if his concerns ebbed.

Shanahan said he believes Berkshire has been shedding Wal-Mart shares at least in part to buy Phillips 66. He has a "buy" rating on Berkshire.