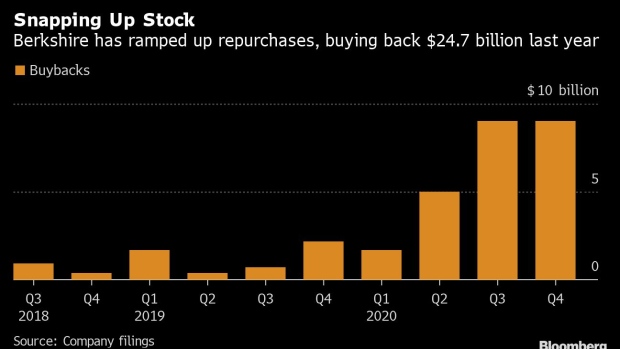 Warren Buffet, chairman and chief executive officer of Berkshire Hathaway Inc., plays bridge at an event on the sidelines of the Berkshire Hathaway annual shareholders meeting meeting in Omaha, Nebraska, U.S., on Sunday, May 6, 2019. The annual shareholders' meeting doubles as a showcase for Berkshire's dozens of businesses and a platform for its billionaire chairman and CEO to share his investing philosophy with thousands of fans. , Bloomberg

(Bloomberg) -- Warren Buffett’s 15-page annual letter to shareholders on Saturday made mention of the pandemic that ravaged the globe in 2020 exactly once: One of his furniture companies had to close for a time because of the virus, the billionaire noted on page nine.

Buffett likewise steered clear of politics, despite the contested presidential election and riots at the U.S. Capitol, and never touched on race or inequality even after protests and unrest broke out in cities across the nation last year. He also avoided delving into the competitive deal-making pressures faced by his conglomerate, Berkshire Hathaway Inc., a topic routinely dissected in past year’s letters.

“Here you have a company with such a revered leader who’s held in such high regard -- whose opinion matters, who has businesses that were directly impacted by the pandemic, insurance companies that were influenced by global warming and social inflation -- and there was not one word about the pandemic,” Cathy Seifert, an analyst at CFRA Research, said in a phone interview. “That to me was striking. It was tone deaf and it was disappointing.”

Buffett, 90, has been unusually quiet since last year’s annual meeting in May amid a multitude of issues facing Americans. His annual letters are often seen as a chance to offer investors help in understanding his thinking on broad topics and market trends, in addition to details on how his conglomerate is faring.

But the Berkshire chief executive officer carefully weighs his words, and some topics, such as the pandemic, risk veering into highly controversial political territory, Jim Shanahan, an analyst at Edward D. Jones & Co., said in an interview.

“There’s been a lot of comments about the pandemic and the impact on the businesses, but by not saying something in the letter, I think it’s just a way to try and avoid saying something that could be perceived as a political statement, which he’s been less willing to do in recent years,” Shanahan said.

A representative for Buffett didn’t immediately respond to a request for comment placed outside routine office hours.

Buffett also stayed quiet on topics that are key to his conglomerate, such as the market environment amid a tumultuous year -- and the work of key investing deputies like Todd Combs and Ted Weschler, according to Cole Smead, whose Smead Capital Management oversees investments in Berkshire.

“There’s more found by what’s not in the letter,” said Smead, the firm’s president and portfolio manager. “I think just time and time again in this letter were sins of omission.”

Here are other key takeaways from Buffett’s letter and Berkshire’s annual report:

1. Buffett Relies on Buybacks Instead of Deals

Berkshire repurchased a record $24.7 billion of its own stock as Buffett struggled to find better ways to invest his enormous pile of cash.

And there’s more where that came from: The conglomerate has continued to buy its own stock since the end of last year, and is likely to keep at it, Buffett said Saturday in his annual letter.

“That action increased your ownership in all of Berkshire’s businesses by 5.2% without requiring you to so much as touch your wallet,” Buffett said in the letter, which pointed out that the company “made no sizable acquisitions” in 2020.

Berkshire did make a small amount of progress in paring the cash pile, which fell 5% in the fourth quarter to $138.3 billion. Buffett has struggled to keep pace with the flow in recent years as Berkshire threw off cash faster than he could find higher-returning assets to snap up, leading to the surge in share repurchases.

2. Apple Is as Valuable to Berkshire as BNSF Railroad

Berkshire’s $120 billion investment in Apple Inc. stock has become so valuable that Buffett places it in the same category as the sprawling railroad business he spent a decade building.

He began building a stake in the iPhone maker in 2016, and spent just $31.1 billion acquiring it all. The surge in value since then places it among the company’s top three assets, alongside his insurers and BNSF, the U.S. railroad purchase completed in 2010, according to the annual letter.

Buffett had always balked at technology investments, saying he didn’t understand the companies well enough. But the rise of deputies including Combs and Weschler has brought Berkshire deep into the sector. In addition to Apple, the conglomerate has built up stakes in Amazon.com Inc., cloud-computing company Snowflake Inc., and Verizon Communications Inc.

Buffett admitted he made a mistake when he bought Precision Castparts Corp. five years ago for $37.2 billion.

“I paid too much for the company,” the billionaire investor said Saturday in his annual letter. “No one misled me in any way -- I was simply too optimistic about PCC’s normalized profit potential.”

Berkshire took an almost $11 billion writedown last year that was largely tied to Precision Castparts, the maker of equipment for aerospace and energy industries based in Portland, Oregon.

The pandemic was the main culprit. Precision Castparts struggled as demand for flights plummeted, prompting airlines to park their jets and slash their schedules. Less flying means lower demand for replacement parts and new aircraft. Precision slashed its workforce by about 40% last year, according to Berkshire’s annual report.

4. Profit Gains Thanks to Railroad, Manufacturers

Despite the pandemic’s effects continuing to hit Berkshire’s collection of businesses, the conglomerate posted a near 14% gain in operating earnings in the fourth quarter compared to the same period a year earlier.

That was helped by a record quarter for railroad BNSF since its 2010 purchase and one of the best quarters for the manufacturing operations since mid-2019.

Berkshire’s annual meeting has for years drawn throngs of Buffett fans to Omaha, Nebraska, where the conglomerate is based. This year, the show is moving to the West Coast.

While still virtual because of the pandemic, the annual meeting will be filmed in Los Angeles, the company said Saturday.

That will bring the event closer to the home of Buffett’s longtime business partner, Charlie Munger. Buffett and Munger will be joined by two key deputies, Greg Abel and Ajit Jain, who will also field questions.

Buffett and Abel, who lives closer to Berkshire’s headquarters, last year faced “a dark arena, 18,000 empty seats and a camera” at the annual meeting, Buffett said in his letter. The 90-year-old billionaire said he expects to do an in-person meeting in 2022.