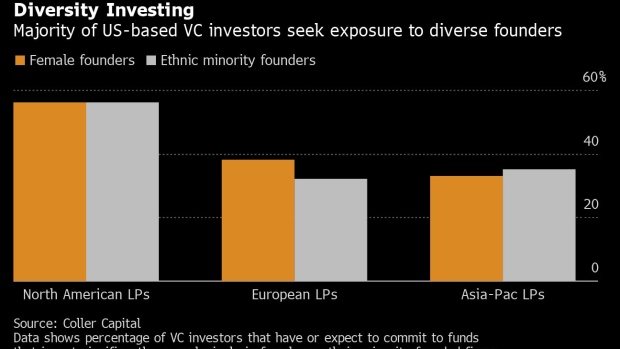 The New York Stock Exchange (NYSE) is reflected at the Federal Hall building in New York, U.S., on Monday, Jan. 4, 2021. In a historic year that marked a rapid plunge into bear market territory and a swift recovery into the bull zone, high-flying technology stocks and electric-vehicle pioneer Tesla Inc. were standout trades. Photographer: Michael Nagle/Bloomberg , Bloomberg

(Bloomberg) -- The majority of US and Canadian-based venture capital investors are planning to back funds with exposure to female founders, a sign that male-dominated capital allocation might start to shift.

About 56% of North American-based investors, known as limited partners, said they expect to allocate capital to VC fund managers that invest significantly or exclusively in businesses founded by women, according to private equity firm Coller Capital who surveyed 110 investors in a review of the market. A similar proportion said they’d commit to funds that invest in firms led by people from a diverse background.

A shift is sorely needed. Companies with solely female founders raised just 2.2% of all venture funding in the first eight months of 2021, according to Crunchbase data.

There is appetite to seek out managers with this approach, said Iyobosa Adeghe, investment principal at Coller Capital. “While those managers will have to fit the commercial mandate as well, there is an intent to uncover managers and be open minded to managers who may for various cultural reasons may be underrepresented,” he said.

Investors in recent years have increasingly screened fund manager partners for their environmental, social and governance credentials. That has prompted managers to jettison asset types deemed unacceptable to many investors, such as fossil fuel extraction. It has also led to discussions around diversity and whether investors can and should direct managers to back businesses run by minorities. Goldman Sachs Group Inc. is among the firms specifically targeting diverse-led businesses, committing $1 billion last year to an in-house initiative.

A survey of US-based asset managers by Morgan Stanley in 2021 found that three-quarters of venture capitalists believed it was possible to intentionally invest in diverse-led entrepreneurs while still maximizing returns. Even so, the bank also found resentment over diversity quotas in investments and the time needed to source appropriate opportunities. The US bank had previously identified such businesses as a blindspot for investors who tended to favor firms run by White males.