Big tech will bring the market back up as companies recover: Art Hogan

Whether it’s commendable courage or a refusal to face reality, a receding stock market tide has left Wall Street analysts sitting with price predictions that will take more than a little luck to come true.

Bear-market casualties from Peloton Interactive Inc. to Coinbase Global Inc. are forecast by equity handicappers to double, going by consensus targets compiled by Bloomberg. It’s the same story for a swath of gutted stocks whose travails haven’t dissuaded perennially optimistic analysts of their bullishness.

Novavax Inc., a developer of coronavirus vaccine, is poised to surge 193 per cent, analyst estimates compiled by Bloomberg show. Uber Technologies Inc.’s failure to earn a profit in four years shouldn’t keep it from vaulting 129 per cent, its professional followers agree. Anyone upset about Carvana Co.’s 90 per cent plunge in 2022 can take heart in the experts’ opinion that it’s due for a 218 per cent rebound.

All of which is to say that the brutal six-month repricing in markets has been met with a significantly less hurried reappraisal of analyst forecasts, leaving many stocks sporting projections that require a doubling or tripling to achieve.

“Investors are just too sick of the whole thing to really believe that kind of number,” said Ed Yardeni, the president of Yardeni Research Inc. who recently asked whether analysts are “delusional” boosting earnings estimates amid signs of an economic slowdown. “When investors own a stock that’s gotten put down by 30 per cent and an analyst tell them that it’s going double a year from now, that doesn’t really have much credibility.” 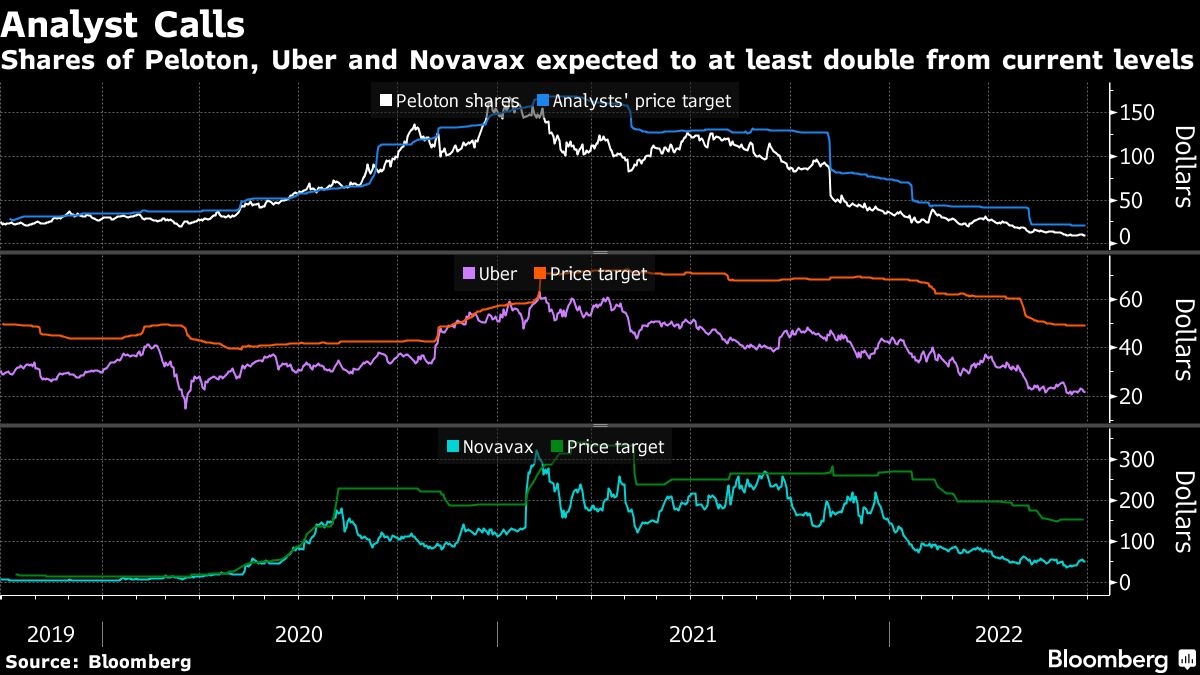 The equity selloff has left 33 companies in the Russell 1000 with forecasts for rallies of 100 per cent or more. Stocks where a consensus of forecasters see a gain of 50 per cent number in the hundreds. All told, following the index’s 21 per cent plunge, the median price target for companies is 32 per cent above its current level, compared with 12 per cent at the start of the year.

History is clear: While a few may succeed in calling big market turns, no larger community of prognosticators is likely to do the same. The state of analyst estimates today is a carbon copy of situations in past bear markets, including in 2020, when nearly 300 companies sat with predictions they would double, and 2009, when at least 100 did.

A lot of factors explain the big gaps between price forecasts and where stocks sit, most obviously that analysts who’ve watched companies they cover plunge may simply believe they’ll bounce back as recession anxiety lifts. Many of the stocks with giant discounts to estimates at the bottom of the COVID crash did end up rebounding to hit their targets.

Corporate America is also on the eve of an earnings season in which the impact of inflation and Federal Reserve rate hikes on consumer consumption will be described. Securities analysts, who move deliberately in the best of times, may be waiting for second-quarter results to decide how sharp an ax to take to their views.

“The market has sold off in anticipation of an economic collapse that may not actually materialize,” said Ivan Feinseth, analyst and chief investment officer at Tigress Financial Partners. “We still haven’t gotten a big wave of earnings pre-announcements from companies that everyone has feared.”

Beyond those are certain behavioral restraints, including hubris, an unwillingness to admit to being wrong, and institutional groupthink. “Analysts are fearful of putting out a sensational shift in their expectations,” said Chad Morganlander, senior portfolio manager at Washington Crossing Advisors. “The fear is, if you’re the first out the gate to revise your estimates lower and you’re wrong, you may as well revise your resume.” 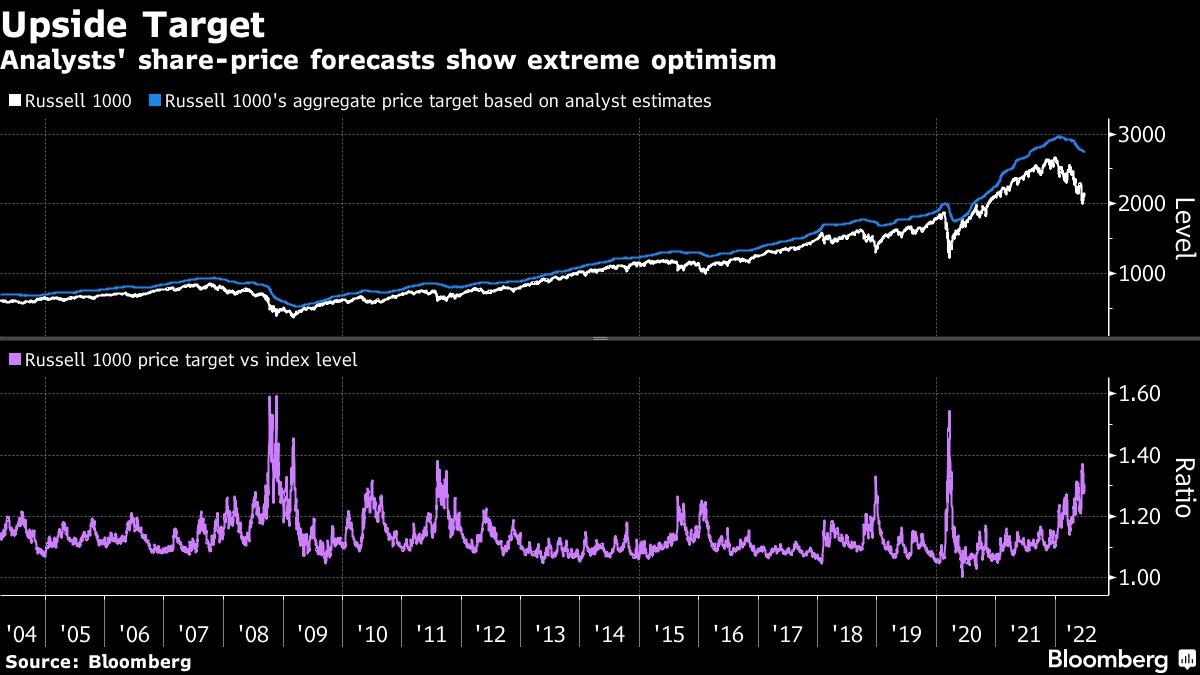 Added together, bottoms-up forecasts for individual companies project a gain of 31 per cent for the Russell 1000. For that to come true, the index would not only need to exceed its previous all-time high set in January, but it would also require one of the fastest climbs ever recored in Bloomberg data going back to 2004.

As virtually always happens, the velocity of share declines this year has taken Wall Street by surprise. Adjustments have been slow, not just on price targets but also on forecasts on corporate earnings. At US$249 a share, their expected 2023 profits for S&P 500 firms have increased by roughly US$7 this year, an improvement that’s at odds with growing recession warnings.

For some of the biggest losers, analysts haven’t been able to slash forecasts fast enough. Peloton’s average price-target has dropped to US$21 from US$74 this year. Still, with the stock plunging as it has been, even the lowered number points to a doubling in prices.

The same is true for Novavax and online used-car dealer Carvana, which going by estimated returns are expected to rank atop the Russell 1000 leaderboard.

The meltdown in the crypto space has yet to completely shake Wall Street confidence in Coinbase. While Goldman Sachs Group Inc. recently downgraded the digital currency exchange to a sell rating, the majority of analysts still consider the stock a bargain.

No profits are no problem for ride-hailing company Uber, whose stock analysts say would recover all its losses from the past year. 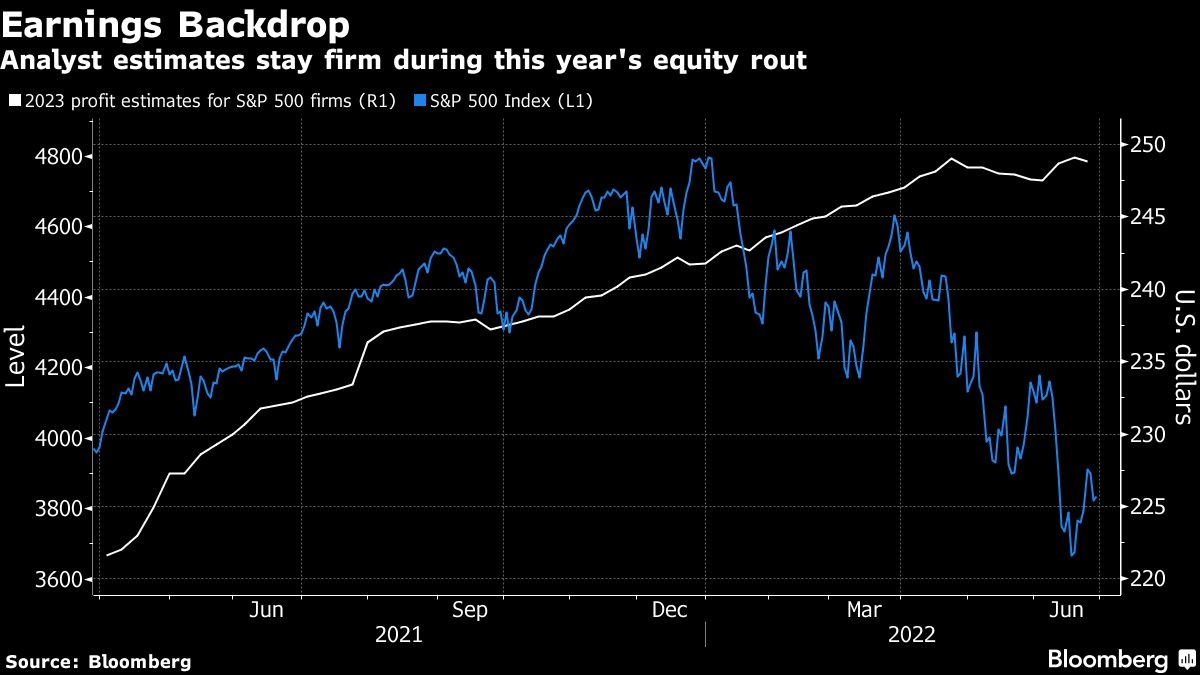 Among analysts, there is a belief that many stocks got unduly penalized during the sweeping selloff triggered by a hawkish Fed and war in Europe.

Angelo Zino at CFRA Research, who cut Uber to buy from strong buy in May, says the bar for analysts to come up with new investment rationales is much higher than top-down macro prognosticators who can simply call a market or economic bottom when sentiment shifts.

“I can’t change target prices and recommendations just because there could be a bad second quarter,” Zino said. “It’s almost too late to start downgrading names to a large extent unless there’s a situation where the competitive position for these companies or industry landscape is so bad that it warrants it.”