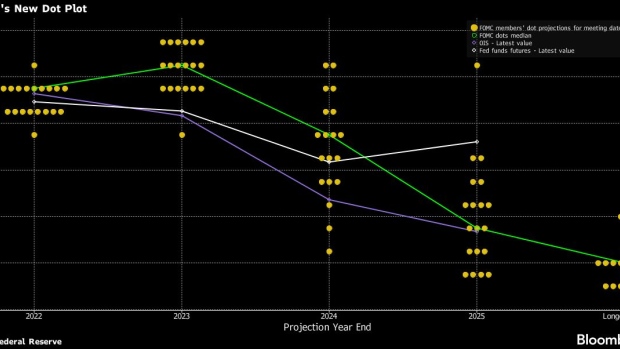 “This is a serious problem and we need to be sure we respond to it appropriately,” Bullard told an economic conference in London Tuesday. “We have increased the policy rate substantially this year and more increases are indicated,” in the Fed’s latest forecasts.

His commitment to reducing inflation to the Fed’s 2% target was broadly echoed by Chicago Fed chief Charles Evans and Neel Kashkari of Minneapolis, who said the central bank should deliver on the rate increases they have forecast and then hold them there to bring price pressures to heel.

Their remarks maintain Chair Jerome Powell’s message last week that they will not flinch from confronting inflation despite pain for the US economy -- a hawkish stance that’s roiled financial markets and contributed to a steep rise in bond yields.

Fed officials raised interest rates by 75 basis points on Sept. 21 for the third straight meeting, bringing the target for the benchmark federal funds rate to a range of 3% to 3.25%. Median projections show officials forecast that rates would reach 4.4% by the end of this year and 4.6% in 2023, a more hawkish shift in their so-called dot plot than anticipated.

Interest rates may need to move to “the 4.5% range,” or about 1 percentage point higher than his projection in April, the St. Louis Fed official said, citing the latest policy committee forecasts as well as a recommended policy rate from an adapted version of the Taylor Rule, a guideline developed by Stanford University’s John Taylor.

“We have just now gotten to the point where we can argue we are in restrictive territory,” Bullard said. Referring to the rate path laid out in the Fed’s dot plot, he said “I think we need to stay at that higher rate for some time to make sure we’ve got the inflation problem under control.”

Fed officials signaled they expect another 1.25 percentage points of increases over the final two policy meetings of the year in November and December, according to the median of their projections. Investors currently expect a fourth straight increase of 75 basis points at the Nov. 1-2 meeting, according to prices of futures contracts.

Bullard said the US faces recession risks. But he played down the degree of the threat signaled in financial markets by the inverted shape of the yield curve -- with shorter-dated securities yielding more than longer-dated ones.

“You would expect the yield curve to be inverted based on the nominal outlook, and not necessarily based on the prediction of a recession,” he said. “It is encouraging that the inflation expectations are in the right place.”

While a number of Fed critics, including former New York Fed President William Dudley, have criticized the central bank for not being upfront with Americans about the level of pain that will be required to bring down inflation, Bullard disagreed and said today’s situation wasn’t too similar to the 1970s. Market pricing of Fed intentions means the tightening of policy has happened well in advance of actual rate hikes, unlike the Paul Volcker-led central bank, he said.

“I think that that means we have a better chance of success,” he said. “So strict comparisons to Volcker I think are inappropriate at this juncture.”

Fed critics are also basing their expectations of considerable pain needed to douse price pressures on the Phillips curve relationship between rising unemployment and falling inflation, which hasn’t worked in recent years, Bullard said. Instead, inflation should come down from reducing inflation expectations.

“We’ve got a better chance of success with less disruption to the economy than Volcker would have had,” Bullard said.

He instead cited the experience of the Fed’s tightening in 1994 led by Alan Greenspan, when rates rose by 3 percentage points without a recession, setting the stage for “a stellar second half of the 1990s.”

“So I’m hopeful that we can get a similar performance here,” Bullard said.

Fed officials have been united in their calls for tightening to douse inflation near a four-decade high. Earlier, Evans said in a CNBC Europe interview he favored continued hikes, though he also said he could see rates peaking in March followed by a pause in any moves and possibly declines.

Neel Kashkari, in separate remarks during an online interview conducted by the Wall Street Journal, said the Fed should keep tightening until it saw compelling evidence that core inflation was falling and then “be patient,” while nodding to the danger that officials could go too far.

“There’s a lot of tightening in the pipeline. We are committed to restoring price stability but we also recognize given these lags there is a risk of overdoing it,” he said. Asked if he saw grounds for an even larger 100 basis-point increase, Kashkari said “the pace that we’re undertaking right now is appropriate.”