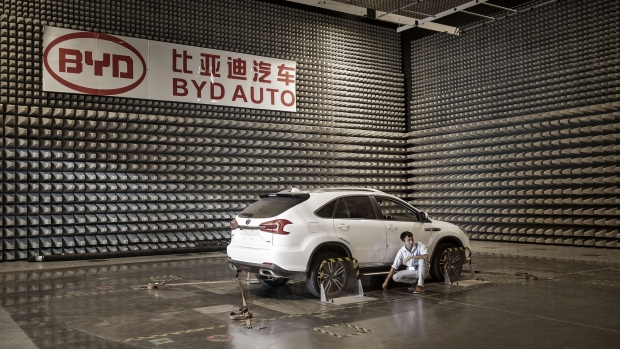 A vehicle sits in an electro-magnetic interference testing lab at the BYD Co. headquarters in Shenzhen, China, on Thursday, Sept. 21, 2017. China will likely order an end to sales of all polluting vehicles by 2030, BYD's Chairman Wang Chuanfu predicted, spurring the nation's leading maker of electric cars to consider supplying batteries to competitors during the powertrain transformation. Photographer: Qilai Shen/Bloomberg , Bloomberg

(Bloomberg) -- BYD Co., the automaker backed by Warren Buffett, is readying to sell its own batteries to Tesla Inc., an executive at the Chinese company has told state media.

While there’s long been speculation about the likelihood of BYD striking a battery supply deal with the world’s biggest maker of electric cars, neither party has ever confirmed talks. Representatives for BYD didn’t immediately respond to messages seeking comment. Tesla declined to comment.

Cell orders from Tesla would be a coup for BYD, one of China’s biggest automakers. The company’s May sales were stronger than expected, particularly against the backdrop of China’s Covid-related disruptions, with analysts putting the result down to BYD’s “higher level of vertical integration and better supply chain management.”

BYD, which is aiming to become more directly involved in the mining of lithium, the raw material that’s crucial for EV batteries, pledged earlier this year to stop producing cars entirely powered by fossil fuels.

CATL counts Tesla as its largest customer, generating around 13 billion yuan ($1.9 billion) or 15% of its power battery unit’s revenue. In recent months, the Ningde, Fujian-based company has struggled with soaring raw material prices and has used its dominance in the market to help pass on those rising costs to customers including Tesla, Nio Inc. and Xpeng Inc.