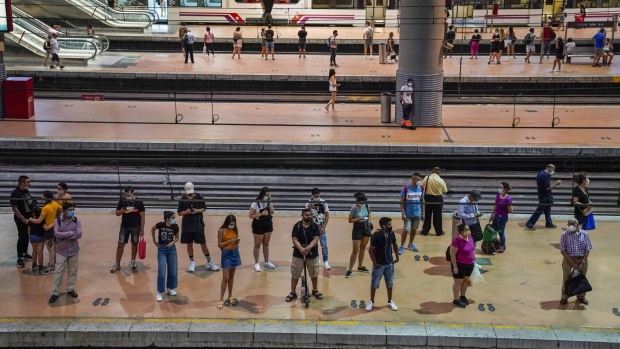 Passengers wait for a train on the regional services platform at Atocha rail station in Madrid, Spain, on Wednesday, Aug. 5, 2020. Lockdowns have witnessed a surge in eco-friendly mobility policies like bike lanes, scooter rentals and pedestrianized plazas, which may well prove more than fleeting trends. , Bloomberg

(Bloomberg) -- High-speed train services between Madrid and Barcelona were interrupted on Monday after 600 meters (1,968 feet) of fiber-optic and signaling cable was pilfered from the track linking Spain’s two biggest cities.

Service was halted between the stations of Camp de Tarragona and Figueres-Vilafant, ADIF, the rail network operator, said in a statement. A 19-year-old man was detained in connection with the theft, according to El Pais newspaper.

The rail disruption complicates an already complex summer travel season with tourism back at pre-pandemic levels. As passengers on Spain’s busiest high-speed train route between the tourist and business hubs faced delays, Ryanair Holdings Plc’s Spanish cabin crews were kicking off a series of strikes that will affect flights until early January.

Ouigo had to cancel today’s 7:05am Madrid-Barcelona train and delayed other morning services, a representative for a communications agency working for the firm said by phone. In total, 5,000 Ouigo passengers suffered delays.

Meanwhile, the strike by Ryanair crews caused the suspension of at least 10 flights at Barcelona’s El Prat airport, according to the USO union and the carrier’s external public relations firm in Spain. The walkouts for four days a week are set to last until Jan. 7.