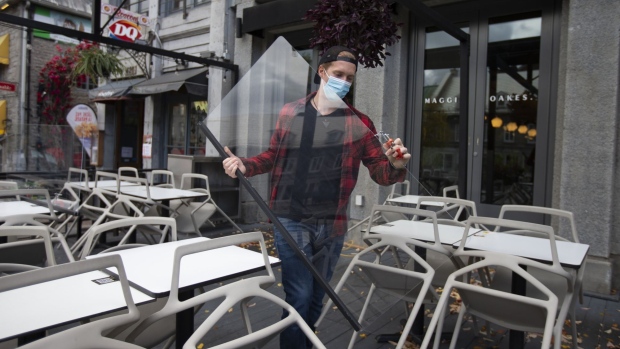 California’s numbers on unemployment claims are set to remain frozen at prior levels in Thursday’s national report and potentially longer, extending distortions that some economists were expecting to subside after the state ended a two-week pause on filings.

The most populous state resumed accepting benefits applications last week following an overhaul of its systems to address a massive backlog and implement better identity verification.

But the state’s claims will continue to be estimated in national figures -- using the numbers from the week before the pause in mid-September-- until the figures normalize, which could take two to three weeks, the Labor Department said in response to questions from Bloomberg News.

That means Thursday’s report, and possibly next week’s, will continue to show California’s initial state claims remaining at the mid-September level of 226,179 -- resulting again in an incomplete, even inaccurate, snapshot of the national job market.

Eventually, prior weeks’ data will be revised to reflect the accumulated claims based on the week in which they should have been filed. If revisions aren’t incorporated within the Labor Department’s two-week window, such updates won’t show up in national data until the department’s regular annual revisions next year, the department said.

It all means that economists, investors and policy makers who watch weekly claims to judge the strength of the U.S. rebound will need to be even more careful than usual. In addition to state employment departments being overwhelmed by record applications this year, several reports have seen large errors and the Labor Department recently made a major change to how it adjusts numbers for seasonal fluctuations.

“The California issue presents an enormous challenge in interpreting initial claims data,” said AnnElizabeth Konkel, an economist at jobs website Indeed. Using the last reported figure before the pause, especially because California is such a large state, “makes reading into any directional change essentially meaningless,” she said.

California has struggled during the pandemic to keep up with a massive volume of claims due to outdated systems, with the problems documented in a 103-page report issued last month by a “strike team” assembled by Governor Gavin Newsom.

Many residents didn’t receive payments on time, and the backlog at one point was growing by at least 10,000 claims per day. Only one of every 1,000 people could get through to one of the call centers on a given day, the report said.

As of Sept. 16, there were nearly 600,000 backlogged initial claims and an estimated one million-plus backlogged continuing claims -- figures that would make a sizable difference in national totals.

The two-week pause, which began Sept. 19, prevented new applicants from ending up in the backlog while the new verification system was being implemented, said Jennifer Pahlka, a former U.S. deputy chief technology officer who co-chaired the strike team.

“We knew that many more claimants would now be able to go through the automatic process and potentially get help in a very timely manner,” Pahlka said.

Given California’s population of about 40 million, it usually accounts for a large share of unemployment insurance applications, about 18% of the national total for regular state programs. Since May, however, California’s share has been growing, most recently to about 28% of claims nationally.

While the national picture for initial state claims data looks generally similar even when California’s filings are excluded, other populous states such as Texas and Florida have seen more consistent declines in claims compared with California’s plateauing.

California’s unemployment figures may be partially inflated by the distorted claims numbers, but the state is also recovering more slowly than others because it has re-opened more slowly, said Michael Bernick, former director of California’s Employment Development Department. Recent wildfires may play a minor role in job loss, but the major contributor is the impact of the Golden State’s prolonged lockdowns, he said.

California’s EDD has also been dealing with widespread fraud, which from mid-August to early September appeared to spur a doubling in applications for Pandemic Unemployment Assistance -- a federal jobless benefits program for those not typically eligible like self-employed workers.

Once the fraud was addressed in September, PUA applications fell more than 72 per cent, but the issue could still be having some impact, Bernick said.

The EDD didn’t respond to requests for comment on how or when adjustments to the data would be made.

Though California has injected additional uncertainty into the claims data, the broader trend remains clear: Things are improving “but not at a pace that will get us back to normal quickly,” said Daniel Zhao, senior economist at jobs website Glassdoor Inc.