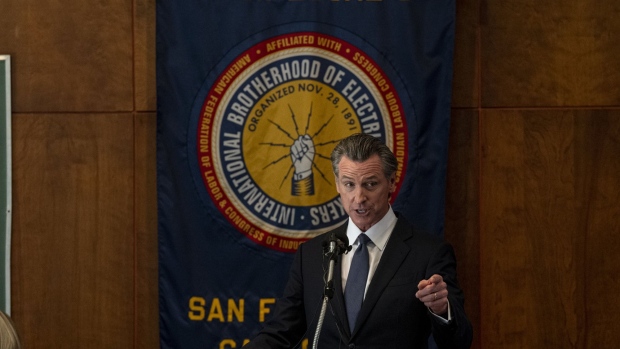 (Bloomberg) -- California voters have rejected a recall of Governor Gavin Newsom, quashing an effort to oust the leader of the most-populous U.S. state and keeping the first-term Democrat in office through at least next year.

About 68% of voters in a special election Tuesday responded “no” to the ballot question asking if Newsom should be removed, according the Secretary of State’s office, with about 17% of votes counted. A majority of “yes” votes was needed for his ouster. The Associated Press, CNN and NBC declared the race in Newsom’s favor.

The result is a major victory for Newsom, 53, and Democratic leaders who had characterized the recall attempt as a power grab by supporters of former President Donald Trump. A loss would have marked a sharp reversal for California, which has championed itself as a leader in progressive initiatives and hasn’t elected a Republican to statewide office since 2006. It also would have signaled trouble for national Democrats heading into the 2022 midterm elections.

Fueled by anger over pandemic restrictions and the direction of the state’s policies, the recall election was only the second for a governor in California’s history. Success for Newsom hadn’t been assured, with polls showing Republicans especially galvanized to vote. Yet his momentum grew in recent weeks as Democrats rallied support and framed the leader in polls to replace him, conservative radio host Larry Elder, as holding views that are anathema to most residents.

“Once Larry Elder became the leading candidate on the Republican side, that crystallized the choice for voters,” said Rose Kapolczynski, a consultant who worked on the 2018 gubernatorial campaign of former Los Angeles Mayor Antonio Villaraigosa. “Elder is so extreme, that pushed voters back into opposing the recall.”

Newsom’s win solidifies his support ahead of 2022, when the politically ambitious former mayor of San Francisco would run for a second term. It also delivers another stinging disappointment to Republicans, outnumbered by nearly 2-to-1 in the state.

The movement to remove Newsom started before the coronavirus outbreak and grew in momentum as people chafed under his attempts to control it. He was criticized for dining at a luxury Napa Valley restaurant, maskless, last November while telling Californians to avoid such social interactions.

With the state fully reopened in June, Newsom’s detractors focused on crime, homelessness and unaffordable housing and costs of living as reasons he shouldn’t stay in office.

Newsom’s anti-recall campaign intensified in mid-August, when vote-by-mail ballots arrived in the homes of all registered voters. Liberal leaders including Vice President Kamala Harris, former president Barack Obama and Senator Elizabeth Warren stepped in to show support for him.

President Joe Biden campaigned for the governor Monday in Long Beach, framing Elder as a “Trump clone” and urging Californians to send a message to the nation by keeping Newsom. Elder supports policies as rolling back minimum wage laws and mask mandates, and has faced criticism for past sexist remarks.

“Gavin Newsom changed the conversation from his stewardship to a choice between him and a Trump Republican Party,” Jack Pitney, political science professor at Claremont McKenna College, said in an interview this week on Bloomberg Television’s “Balance of Power With David Westin.” “That motivates Democrats.”

There have been 55 recall attempts for a California governor since 1913. The first to make it to an election, in 2003, resulted in the removal of Democratic Governor Gray Davis and the ascension of Republican movie star Arnold Schwarzenegger. No such prominent candidate appeared in this year’s slate.