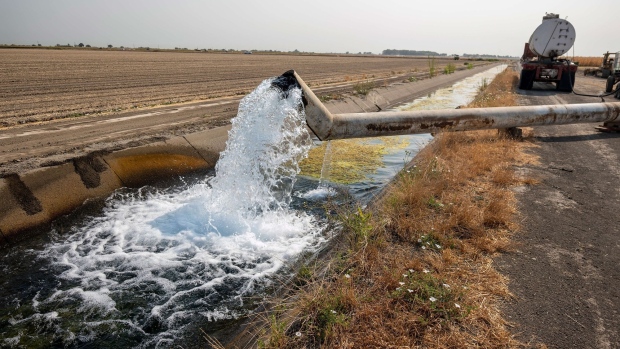 Water is pumped from a well into an irrigation canal on a farm in Yolo County, California, U.S., on Wednesday, Aug. 11, 2021. The drought is so extreme that California regulators earlier this month voted to restrict river diversions for some farmers to protect drinking water supplies. , Bloomberg

(Bloomberg) -- California plans to dramatically curtail water delivery next year from its network of canals, pipelines and reservoirs to 27 million Californians and three-quarters of a million acres of farmland because of a two-year drought.

The California Department of Water Resources said it will prioritize delivery from the State Water Project only for health and safety needs, to maintain salinity control in key wetlands, to protect endangered species and to put water in reserve. That means farmers won’t get any water from the system they had applied for unless conditions improve.

“Despite a wet start to the water year, conditions have dried out since that first storm and we are still planning for a below-average water year,” Karla Nemeth, director of the department, said in a statement. “That means we need to prepare now for a dry winter and severe drought conditions to continue through 2022.”

California is the country’s largest agricultural producer, with its farms and ranches generating $49 billion of sales in 2020, including milk, nuts, fruits and vegetables, according to the California Department of Food and Agriculture.

California gets 75% of its water from rain and snow in mountains in the north. It’s distributed south mostly through two systems, one owned by the state and another controlled by the federal government. About 80% of the state’s water demand comes from the southern two-thirds of the state, according to the California Department of Water Resources.

The 700-mile (1127-kilometer) State Water Project extends two-thirds the length of California, with about 30% of its water used for irrigation, mostly in the farming-rich Central Valley. The rest of its water is supplied to homes, cities and towns and industrial customers.

The federal system of 20 dams and reservoirs and 11 powerplants, and 500 miles of canals and tunnels, supplies water to about a third of the agricultural land in California. It too has had to curtail delivery because of the drought.

In August, the state had to take the hydroelectric power plant at Lake Oroville, the second-biggest reservoir in California, off line for the first time since it was built in 1967 because the water level in the lake was too low.