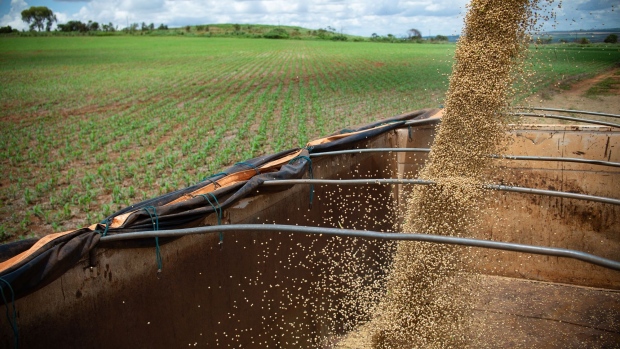 Soybeans during a harvest on a farm near Brasilia, Brazil, on Friday, March 4, 2022. Brazilian farmers are having trouble getting fertilizer for the next soybean crop after top-supplier Russia's invasion of Ukraine, a blow to producers already dealing with surging costs. , Bloomberg

(Bloomberg) -- For the first time ever, farmers the world over — all at the same time — are testing the limits of how little chemical fertilizer they can apply without devastating their yields come harvest time. Early predictions are bleak.

In Brazil, the world’s biggest soybean producer, a 20% cut in potash use could bring a 14% drop in yields, according to industry consultancy MB Agro. In Costa Rica, a coffee cooperative representing 1,200 small producers sees output falling as much as 15% next year if the farmers miss even one-third of normal application. In West Africa, falling fertilizer use will shrink this year’s rice and corn harvest by a third, according to the International Fertilizer Development Center, a food security non-profit group.

“Probably farmers will grow enough to feed themselves. But the question is what they will have to feed the cities,” said Patrice Annequin, a senior fertilizer market specialist for IFDC based in Ivory Coast. When you add increased hunger across West Africa on top of existing risks like terrorism, “this is absolutely dangerous for many governments in our region.”

For the billions of people around the world who don’t work in agriculture, the global shortage of affordable fertilizer likely reads like a distant problem. In truth, it will leave no household unscathed. In even the least-disruptive scenario, soaring prices for synthetic nutrients will result in lower crop yields and higher grocery-store prices for everything from milk to beef to packaged foods for months or even years to come across the developed world. And in developing economies already facing high levels of food insecurity? Lower fertilizer use risks engendering malnutrition, political unrest and, ultimately, the otherwise avoidable loss of human life.

“I’m reducing the use of fertilizer in this crop cycle. I can’t afford such stratospheric prices,” Marcelo Cudia, 61, a farmer in the Philippines’ rice-producing region of Central Luzon, said outside the patch of land he’s been cultivating for the last 13 years. About 12,000 miles away, Brazilian soybean farmer Napoleão Rutilli is facing the same tough choices. “If fertilizers are expensive, we’ll use less fertilizers. If we’ll use less, we’ll produce less,” said the second-generation farmer, 33. “Food prices will increase and everyone will suffer.”

Why Are Fertilizer Prices Going Up?

Commercial farmers rely on a combination of three key nutrients — nitrogen, phosphorus and potassium — to fuel their harvests. Those inputs have always been key, but it was only about a century ago that humanity learned to manufacture mass-produced ammonia-based nutrients. The discovery of the Haber-Bosch method in the early 1900s, which is still used to make fertilizer today, has allowed farmers to vastly increase their yields. The agriculture industry has since come to depend on — even hinge on — man-made fertilizer. Although soil’s needs are different region to region, the general trend is pretty undisputed: More fertilizer use brings more food production.

But as costs for synthetic nutrients have skyrocketed — in North America, one gauge of prices is nearly triple where it was at the start of the pandemic — farmers have had to start paring back use, sometimes dramatically. That’s put the world in uncharted territory.

“Fertilizer prices are up an average of 70% from last year,” said Timothy Njagi, a researcher at the Tegemeo Institute of Agricultural Policy and Development in Kenya, referring to prices in the country. “The fertilizer is available locally, but it’s out of reach for the majority of farmers. Worse, many farmers know that they cannot recover these costs.”

Prices have been climbing for more than a year for a host of reasons: runaway pricing for natural gas, the main feedstock for much of the world’s nitrogen fertilizer; sanctions on a major Belarusian potash producer; back-to-back late-summer storms on the U.S. Gulf Coast that temporarily shut-in production in the region; plus Covid-19 restrictions that have disrupted every global supply chain, including chemicals.

That tightening in the physical fertilizer market has galvanized China, the largest phosphate producer, to restrict outgoing shipments in order to build up a stockpile at home, further exacerbating the global shortage. Add Russia’s invasion of Ukraine, which effectively cut off nearly a fifth of the world’s nutrient exports, and the fertilizer industry and its pricing mechanisms are arguably more broken than ever before.

“Fertilizer sales are very, very low, to the point of desperately low, and this should be traditionally the busiest time of the year,” said Jo Gilbertson, head of fertilizer at Agricultural Industries Confederation, a U.K.-based trade association. “The seeds of the problem are being sown now.”

How Will Lower Fertilizer Use Hit Output?

“My biggest concern is that we end up with a very severe shortage of food in certain areas of the world,” Tony Will, the chief executive of the world’s largest nitrogen fertilizer company CF Industries Holdings Inc., said in a March interview.

In the Philippines, urea — a key nitrogenous fertilizer — is now about 3,000 pesos (about $57) per bag, and even more when transported to the fields. That’s more than three times the price at this time last year, said Roger Navarro, president of Philippine Maize Federation Inc. “Farmers will tend to decrease the usual fertilizer dose of their crop and that will lessen the production,” he said, forecasting a 10% drop in yields. “It is rather sad, but this is reality.”

The yield outlook is even worse elsewhere. Peru’s agricultural industry is facing a deficit of 180,000 metric tons of urea, and output of staples such as rice, potatoes and corn could tumble as much as 40% unless more fertilizer becomes available. The International Rice Research Institute predicted crop yields could drop 10% in the next season, meaning there’ll be 36 million fewer tons of rice — enough to feed 500 million people. In Sub-Saharan Africa, food production could drop by about 30 million tons in 2022, equivalent to the food requirement of 100 million people, the IFDC said in December — and that forecast was made before the war in Ukraine pushed prices to new records this spring.

There’s also a growing concern less fertilizer use will result in lower-quality crops. Just ask Gary Millershaski, who farms nearly 4,000 acres of wheat and roughly 3,000 acres of corn and sorghum in southwest Kansas. Also chairman of the Kansas Wheat Commission, Millershaski said the commission’s “biggest fear” this spring is that farmers may have skipped applying nitrogen as the wheat emerged from winter dormancy several weeks ago. If they did, it could hurt protein content of the grain and result in a “lower class of wheat.”

With nearly half of U.S. wheat exported to other countries, that’s a problem that will impact consumers the world over. The harvesting of hard red winter wheat, the most widely grown class in the U.S. and the grain that’s used to make all-purpose flour, will begin in June.

How Will Lower Fertilizer Use Hit Inflation?

Without a doubt, the food that is produced will be more expensive. Global food prices are already surging at the fastest pace ever as the war in Ukraine hits crop supplies, with a United Nations index of world food costs soaring another 13% in March.

Rising food prices, without a corresponding increase in incomes, have a long history of triggering social unrest. In 2008 and 2011, soaring inflation triggered food riots in more than 30 nations across Asia, the Middle East and Africa, helping to fuel uprisings in the Arab Spring.

“That’s the big concern: Will the high prices of food have a boomerang reaction?” said Gideon Negedu, executive secretary of the Fertilizer Producers and Suppliers Association of Nigeria and a member of the Presidential Fertilizer Initiative. “The food markets may begin to react to these prices because there is no commensurate increase in average household incomes.”

What Can Farmers Do?

Farmers aren’t sitting idly by. Those who managed to secure fertilizer ahead of the latest run-up are being more strategic about how much they use, including leaning into “precision agriculture.” That means collecting more data on their fields, monitoring crops for increased efficiency and rolling out other data analysis tools. Farmers are increasingly testing soil for lingering nutrients and applying exactly as much fertilizer is needed, rather than an overly generous ballpark — a practice that’s been in use across some places like the U.S. and parts of Brazil for decades but isn’t yet commonplace in some other parts of the word.

If a soil tests high for phosphorous or potassium, “often little to no fertilizer is needed at all,” said Carrie Laboski, professor and extension soil scientist at University of Wisconsin-Madison. For some crops like corn, growers might apply a little bit of “starter fertilizer” when they’re planting, which is like insurance if soils are testing high for crop nutrients. When it comes to nitrogen, “they shouldn't eliminate it, but cut back,” she said.

Read more: How the world’s farmers are learning to grow with less

Some farms are also exploring controlled-release formulations, like tiny capsules of nutrients that dissolve slowly over time. Although not a solution for many commercial farms given their large scales, others are exploring alternatives to chemical fertilizers, including animal waste.

“Compost and sewage sludge and biosolids or organic nutrients become more valuable,” said Mark Topliff, lead analyst for farm economics at the Agriculture and Horticulture Development Board in the U.K. “The supply of those has been stretched” as more growers turn to alternatives.

Some farmers are even moving away from high-fertilizer crops altogether, like corn, in favor of lower-demand plantings like beans.

Tregg Cronin, a U.S. farmer in central South Dakota who chooses between growing wheat, corn, sunflowers, oats and soybeans, has found himself in an enviable situation: Drought last year left Cronin’s soil with excess nitrogen. So he’s opting to plant 10% more acres of sunflowers — which need the nitrogen more than soybeans do. But if fertilizer prices stay high in the months ahead, next year he’ll pivot to more soybeans. Others are making similar calculations — and hoping they’re betting in the right direction.

“If you really want to play 3D chess,” he said, “you need to be thinking about your rotation next year more so than this year.”