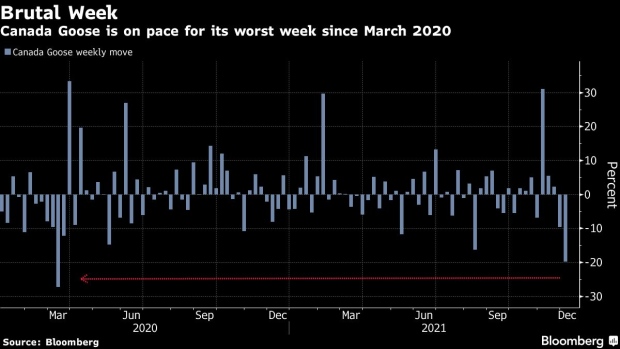 (Bloomberg) -- Canada Goose Holdings Inc.’s problems in China are putting the stock on track for its biggest weekly drop since the early days of the pandemic.

The shares were down 20.6% this week as of 2:17 p.m. New York time on Friday, reflecting investors’ concerns about a controversy in China about its return policy. That would be the biggest slide since March 2020, when the Covid-19 crisis started to hit the North American economy.

The Toronto-based parka marker is under fire, with the ruling Communist Party’s flagship newspaper saying the company has imposed a “discriminative” return policy on Chinese consumers.

Canada Goose also faces a second summons by consumer regulators in Shanghai to explain why it has a different return policy in China than elsewhere after a woman complained she was unable to get a refund for a down coat she bought in a store. Canada Goose refunded the shopper Thursday, according to state newspaper People’s Daily.

Earlier this year, Canada Goose was fined and criticized by state media for allegedly misleading consumers in some advertisements. Chief Executive Officer Dani Reiss said in a November interview the event had had no impact on business.