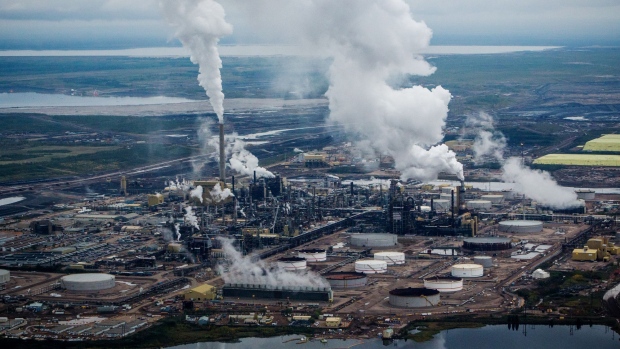 Steam rises from the Syncrude Canada Ltd. upgrader plant in this aerial photograph taken above the Athabasca oil sands near Fort McMurray, Alberta, Canada, on Monday, Sept. 10, 2018. While the upfront spending on a mine tends to be costlier than developing more common oil-sands wells, their decades-long lifespans can make them lucrative in the future for companies willing to wait. Photographer: Ben Nelms/Bloomberg , Bloomberg

Canada’s publicly-traded companies are running behind European and U.K. peers when it comes to disclosing their greenhouse gas emissions, according to a study from the Institute for Sustainable Finance.

Around two-thirds of the S&P/TSX Composite Index disclose greenhouse gas discharges, according to the report written by Sean Cleary and Andrew Hakes. While that’s broadly in line with percentages seen the U.S., it falls below 79 per cent for European and 99 per cent for U.K. listed firms.

The firms that provide disclosures comprise approximately 88 per cent of the market cap of the index, the ISF said. While only 43 per cent of those have their emission estimates verified by a third-party provider, the total from these firms accounts for close to 80 per cent of all reported discharges.