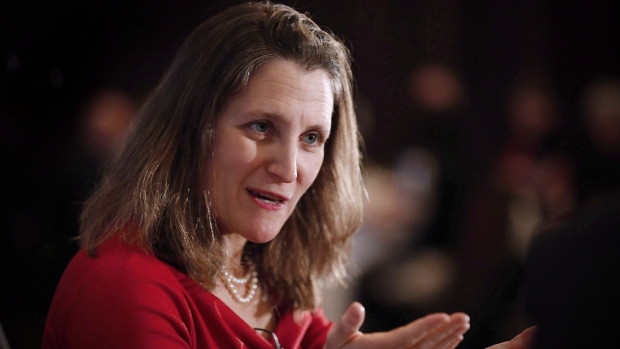 Canada and Mexico on Friday said good progress had been made in talks with the United States to modernize the North American Free Trade Agreement (NAFTA) and that ministers would meet again on Tuesday as they push to wrap up a deal.

Canadian Foreign Minister Chrystia Freeland and Mexican Economy Minister Ildefonso Guajardo struck a positive note after a second day of meetings with U.S. Trade Representative Robert Lighthizer to revamp the 24-year-old accord, which underpins some $1.2 trillion in annual trilateral trade.

"We are certainly in a more intense period of the negotiations and we are making good progress," Freeland told reporters, saying that officials would stay in Washington over the weekend as the eight-month-old talks continue.

Guajardo, who has often sought to temper optimism for a quick deal, said the ministers would meet again on Tuesday.

"There was a lot of progress made today," he said.

The three ministers are pressing for a quick deal to avoid clashing with a July 1 presidential election in Mexico, which would mean overcoming major differences on several U.S. demands.

Canada and Mexico have battled for months with a U.S. push for tougher NAFTA rules on how much North American content vehicles must contain to avoid tariffs, known as rules of origin.

"We continue to work very hard on rules of origin, really the heart of this agreement," Freeland said.

U.S. negotiators had initially demanded that North American-built vehicles contain content that is 85 percent made in the NAFTA countries, based on value, up from 62.5 percent at present.

However, auto industry executives said last week that Washington had softened that demand in an effort to move faster toward a deal.

A source familiar with the talks said Canada and Mexico found the U.S. concessions "really helpful," especially a move to back away from proposals that would have made tracking the origin of parts overly complex.

"We have makings of a deal right now. We could accept where they (the Americans) are at," said the source, who requested anonymity given the sensitivity of the situation.

The source said the three nations were looking at a figure of roughly 75 percent for the NAFTA content of vehicles.

Earlier on Friday, Moises Kalach, a senior representative of the Mexican private sector at the talks, said he believed the sides were perhaps "a couple of weeks away" from a deal.

President Donald Trump, who has repeatedly threatened to walk away from NAFTA unless major changes are made, says the pact has created jobs in Mexico at the expense of U.S. workers.

Lighthizer instilled fresh momentum in early March by floating the prospect of a quick deal "in principle." Mexican and Canadian officials say only an agreement covering the essential details will be viable.