Canada’s big banks will be able to “weather the storm,” according to one analyst, after taking a hit Monday when the price of oil collapsed.

“There’s a lot of uncertainty and I think that’s pretty much an understatement at this stage in the game,” said John Aiken, director of Canadian Financials Research at Barclays Capital, in a BNN Bloomberg interview Tuesday. “But what you want to do with the Canadian banks in particular is take a look at the longer term.”

Shares in all of the Big Six banks came under pressure Monday as Saudi Arabia launched an oil-price war after last week’s OPEC+ meeting ended in disarray when Russia refused to collaborate on proposed deep production cuts.

The Saudis’ decision to ramp up production and offer discounts to customers prompted sharp declines in global oil prices, which also raised concerns about Canada’s economic outlook. By the end of Monday’s session, Canadian Imperial Bank of Commerce had suffered the steepest plunge as its stock fell 13.7 per cent. 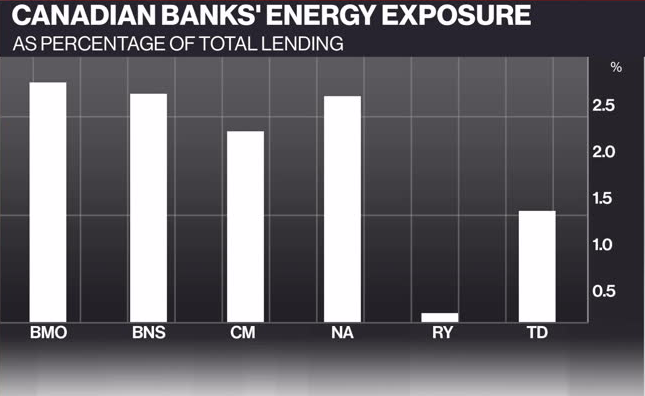 Aiken added there’s likely going to be some pressure on profitability after the Bank of Canada and U.S. Federal Reserve cut interest rates by 50 basis points last week. But ultimately, he predicted the banks will come out mostly unscathed.

“By and large, the Canadian banks are very well-capitalized. They have the fortitude to be able to weather the storm,” Aiken said. “As long as you don’t think that there’s going to be a massive recession or depression, the Canadian banks should come through this quite well. It just depends on whether or not it’s six months, one year, two years.”

While concerns over the banks’ potential losses on loans to Canadian energy companies resurfaced Monday, Aiken noted the country’s big lenders have minimized their exposure to the sector in recent years. Bank of Montreal currently has the greatest exposure, followed by Bank of Nova Scotia.

And when it comes to the banks’ payouts to shareholders, Aiken said they’re not in jeopardy.

“You can never have an ironclad guarantee that dividends are not going to be cut. But if you take a look at behaviour during the Great Recession, no Canadian bank cut its dividend,” he said.

“And we do think they’re as safe as can be in the current context.”