Every other G7 country saw positive growth in Q2, Canada is an outlier: BMO's Doug Porter

Canada’s rebound unexpectedly stalled through spring and early summer, raising questions about the resiliency of the nation’s economy.

Gross domestic product fell at an annualized 1.1 per cent pace from April to June, Statistics Canada reported on Tuesday, down from a revised 5.5 per cent gain in the first three months of the year. Economists in a Bloomberg survey were anticipating a 2.5 per cent expansion.

Adding to the disappointment, economic growth fell a further 0.4 per cent in July, according to a preliminary estimate. 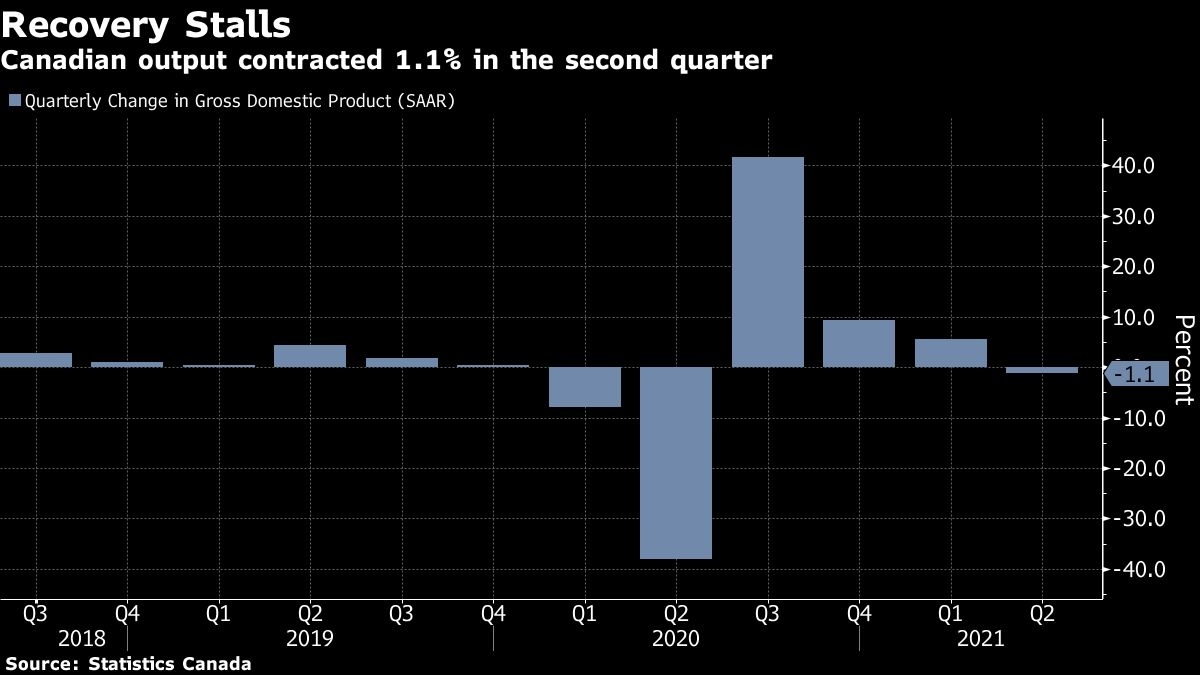 It’s a worse-than-expected result that may prompt analysts to reconsider how quickly the nation’s economy will be able to fully recover from the pandemic, heightening worries about growth just as the country braces for a fourth wave of Covid-19 cases. Bank of Montreal economists immediately cut their forecasts for 2021 growth, while the Canadian dollar fell.

“It seems that the Canadian economy wasn’t on as strong a footing as we had believed,” said Royce Mendes, an economist at Canadian Imperial Bank of Commerce.

“This could change the tenor of the campaign,” Andrew Kelvin, senior Canada rates strategist Toronto-Dominion Bank, told BNN Bloomberg television. He said the figures “would raise the possibility that we could see more promises of fiscal stimulus in the latter days of the campaign.”

The pullback in the second quarter reflects a sharp drop in exports, driven in large part by chip shortages in the auto sector and other global supply chain disruptions. Housing was also a drag as Canada’s real estate market cooled after a pandemic-driven boom. On the quarter, investment in residential structures fell by an annualized 12 per cent, while exports plunged 15 per cent.

The surprise weakness in July may also have been driven by supply chain snarls. Statistics Canada said the likely contraction during the month was led in part by manufacturing, as well as construction and retail trade.

The Canadian dollar pared gains after the GDP report and was down 0.1 per cent to $1.262 per U.S. dollar at 10:06 a.m. in Toronto, as some traders questioned whether the slump in activity will slow the Bank of Canada’s efforts to pare back emergency levels of stimulus in the economy. The central bank has already downsized its asset purchase program three times and was expected to move again as early as a policy decision next week.

That’s now off the table, according to Stephen Brown, an economist at Capital Economics Ltd.

“I had previously thought there was a reasonable chance that they might press on next week,” Brown, who still expects a taper in October, said by email. “That’s now been pushed back.”

Ian Pollick, head of fixed income, currency and commodity research at Canadian Imperial Bank of Commerce, also expects a reduction in asset purchases in October. “The level of yields remains low and we do not expect today’s data to derail the underlying reasons that prompted the reduction of active purchases,” Pollick said by email.

“Canada’s second-quarter contraction throws cold water on expectations the central bank can quickly move to normalize the policy rate in 2022.”

Yet, the data have elevated the risks around the outlook, with any further bad news on the economic front potentially changing the picture for policy makers. The Bank of Canada is expected to be among the first central banks in advanced economies to hike interest rates next year.

Doug Porter, chief economist at the Bank of Montreal, cut his forecasts for Canadian economic growth this year to 5 per cent, from 6 per cent.

While a weak second quarter was expected, the flash reading for July was the real surprise disappointment as most economists expected to see growth in that month as widespread reopenings continued from a ramp-up in vaccines.

“Clearly supply issues are dragging in a variety of areas,” Porter said in a report to investors.