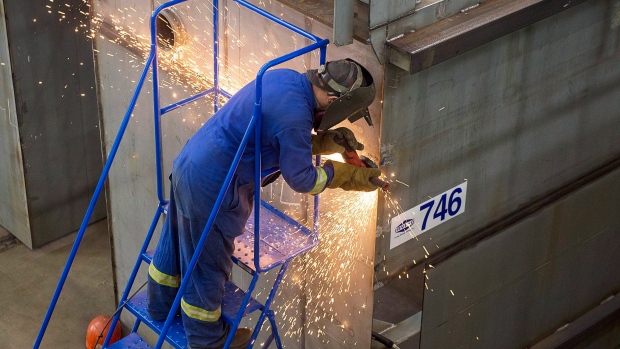 OTTAWA - Canada unexpectedly shed jobs last month, sending the unemployment rate higher even as fewer people were looking for work, and a lackluster gain in exports in June raised questions of whether the central bank's outlook was too sunny.

The nation lost 31,200 jobs in July, Statistics Canada said on Friday, frustrating economists' expectations for a gain of 10,000. The decline was driven by a 71,400 drop in full-time positions, while the goods-producing and service sectors of the economy fared poorly.

The jobs report "obviously reinforces the point that the Canadian economy is struggling to make any headway," said Doug Porter, chief economist at BMO Capital Markets. "We're seeing next to no job growth on a year-over-year basis."

The unemployment rate edged up to 6.9 per cent, while the participation rate slipped to 65.4 per cent.

The Canadian dollar weakened sharply against the greenback as the data contrasted with stronger-than-expected U.S. job growth.

While Canada's employment figures can be volatile month-to-month, Friday's report was compounded by the disappointing trade figures, Porter said.

Canada's trade gap unexpectedly widened to a record deficit of $3.63 billion in June as imports of motor vehicles and parts jumped.

Although exports rose 0.6 per cent, that was largely due to a jump in prices, with volumes down 1.4 per cent. Exports fared worse in the second quarter overall, tumbling 4.7 per cent in the largest decline in seven years.

“The Bank of Canada, which so far has kept a pretty brave face in light of some disappointing economic news, could really change its tune on the economy,” Sal Guatieri, director and senior economist with BMO Capital Markets, said in an interview with BNN.

After a strong start to the year for exports, economists expect this drop, along with disruptions to oil production because of wildfires in northern Alberta, to cause the economy to show a decline for the second quarter.

The Bank of Canada is counting on an uptick in non-energy exports for the economy to meet its projections, but those shipments were down 0.4 per cent in June.

While the bank expects to see growth in the non-commodity export sector over 2017 and 2018, it nonetheless revised its expectations down earlier this month due to a slowdown in U.S. business investment.

"There were already plenty of questions over the Bank of Canada's optimism on exports," Porter said, "and today's pair of reports will just accentuate those question marks."

Still, the figures were unlikely to change the path of monetary policy for now, economists said. The bank is seen on hold until late 2017.

"I don't think they are willing to concede anything until they at least have indications on whether fiscal stimulus is helping," said Mark Chandler, head of Canadian fixed income and currency strategy at Royal Bank of Canada.