Albertans flock to polls in record numbers after vicious campaign

Voters in the Canadian province of Alberta, home to the world’s third-largest oil reserves, head to the voting booth today in a divisive election that could have wide-ranging implications for the country’s environmental policy and global energy markets.

Polls have consistently shown that United Conservative Party Leader Jason Kenney is on track to unseat center-left New Democratic Party Premier Rachel Notley. Recent surveys show his lead narrowing, with the UCP at 47 per cent support, to 38 per cent for the NDP, according to poll tracking by the Canadian Broadcasting Corp. The CBC projects 63 seats for the Conservatives, to 23 for the NDP. Polls close at 8 p.m. Calgary time.

At stake is leadership in the province that churns out about 80 per cent of Canada’s oil and sets direction for the energy industry, which accounts for 10 per cent of the nation’s economy. Alberta’s current production puts it on par with OPEC member United Arab Emirates, and its crude reserves trail only Saudi Arabia and Venezuela.

A Kenney win would deprive Prime Minister Justin Trudeau of an occasional ally in Notley, who had helped his environmental ambitions by implementing a provincial carbon tax and capping oil-sands emissions. The Conservative leader promises to scrap Alberta’s carbon levy and would join a legal fight with several other provinces to block a federal tax that’s imposed on any region that doesn’t have a carbon plan of its own. 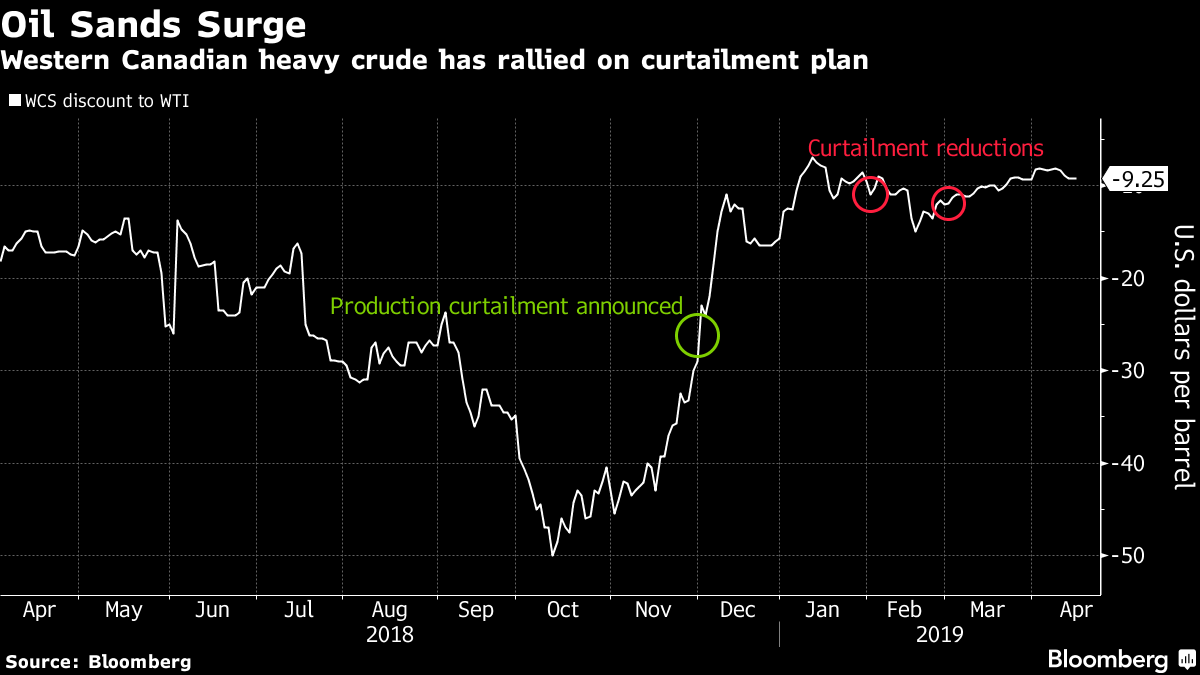 On the key issue facing Alberta’s energy industry -- a lack of pipelines that has weighed on local crude prices -- it remains to be seen how much either candidate can do. Kenney plans to create a $30 million “war room” to hit back at anti-energy campaigners and investigate their sources of funding. Notley has favored outreach, traveling the country to drum up support for the industry and pipelines.

But many of the pipeline problems originate outside of Alberta’s borders. TransCanada Corp.’s Keystone XL delays have been in the U.S., most recently at the hands of a Montana federal judge. Enbridge Inc.’s Line 3 has been pushed back a year because of permitting issues in Minnesota. And the Trans Mountain expansion, purchase by the Trudeau government from Kinder Morgan Inc. last year, has been blocked by a federal judge amid opposition in British Columbia.

“The most important issue is out of their hands, which is market access,” said Laura Lau, who helps manage $1.6 billion at Brompton Corp. in Toronto. “That’s the No. 1 issue by far.” 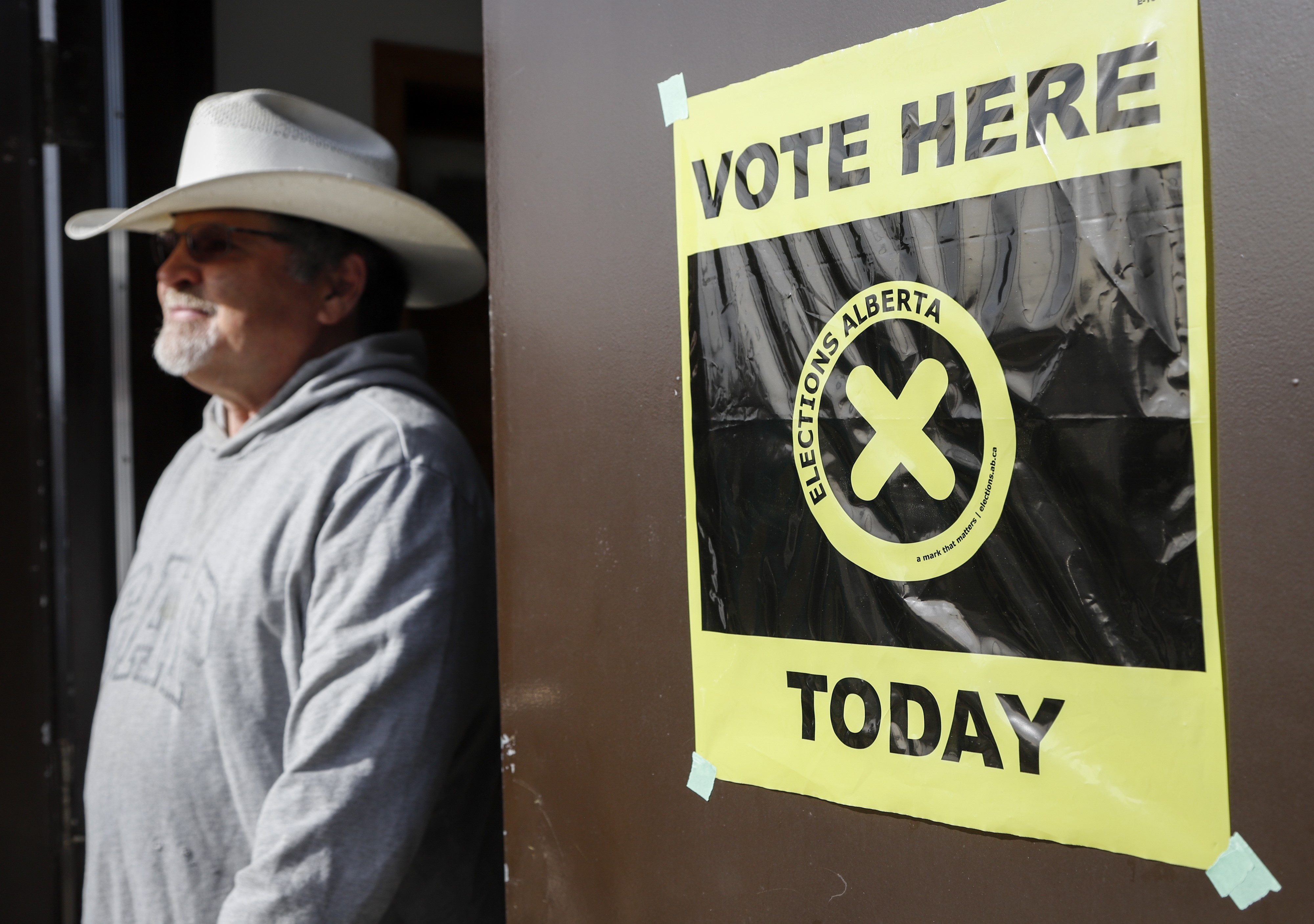 What will be most affected by Alberta’s election results?

Kenney and Notley also differ on the idea of the government helping increase the province’s capacity to ship crude by rail. Notley has signed contracts to invest $3.7 billion in leasing rail cars and selling shipping service to producers that can’t get pipeline space for their oil. Kenney plans to kill that program, saying the private market can better solve that problem.

The government’s crude-by-rail plan is factored into current prices, and local crude -- now trading close to a year high -- may drop if the program is canceled, Deloitte analyst Andrew Botterill said. Private companies may not have enough capital to make those investments, he said.

Beyond the energy industry, Kenney, 50, has campaigned on cutting corporate taxes and balancing the province’s budget within his first term. Notley, 54, has said those plans favor only the wealthy and would harm the province’s health care and education systems.

Investors appear comfortable with the prospect of a Kenney win. The relative yield on Alberta’s five-year bond maturing in 2024 has narrowed to 28 basis points over federal government debt, from a high of 50 basis points in January.

The campaign has tapped into social issues as well. Notley, who ended a 44-year run of Conservative party rule with her victory in 2015, has criticized Kenney’s strong anti-abortion positions as well as his support for allowing schools to notify parents if their child joins a gay-straight alliance. Kenney’s campaign also has been beset by occasional offensive or controversial remarks by other members of his party.

Kenney also has come under fire for allegations he helped a fellow candidate for his party’s leadership attack his chief rival for the post, a scandal that’s become known locally as the “kamikaze campaign.” Kenney’s party was formed two years ago in a merger of the Progressive Conservative and Wildrose parties.

Whether those social issues will outweigh the economic troubles in Alberta remains to be seen. The oil-industry malaise and investment cuts have pushed Alberta’s jobless rate to 6.9 per cent, among the highest in Canada.

“My experience over all my years in politics is that people vote on pocketbook issues first,” said Rona Ambrose, a former federal lawmaker who served as interim Conservative leader. Ambrose supports Kenney but isn’t part of his campaign. “There are many other issues that people care about, but when it’s this dire of a situation, and the economy is the No. 1 issue, people vote their pocketbooks.”