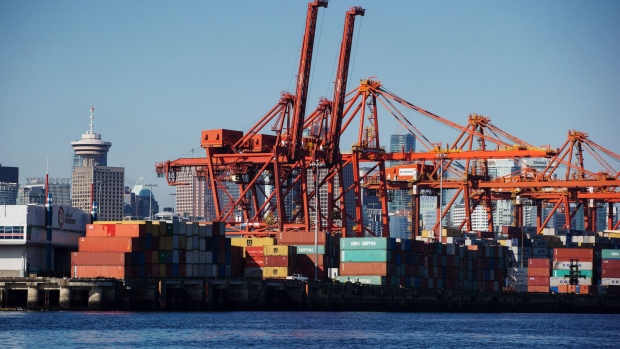 Canada’s trade deficit narrowed by less-than-expected in September as the nation’s exports continued to decline, adding to concerns that trade tensions and uncertainty around global growth are weighing on business.

The nation’s merchandise trade gap hit $978 million in September, from a revised $1.2 billion deficit in August, Statistics Canada said Tuesday in Ottawa. The result missed economist expectations for a smaller deficit of $650 million.

The weakness in the report is consistent with the view from the Bank of Canada that ongoing trade conflicts between the U.S. and China is hitting business investment in Canada and weighing on exports. The central bank last week forecast an outright decline in exports and investment in the second half of 2019.

Both exports and imports fell in September. Merchandise shipments abroad fell 1.3 per cent, with declines across the board led by energy products, particularly crude. It marked the third drop in the past four months, leaving exports down 5.7% from record levels hit in May. In volume terms, which strip out the effects of price changes, exports fell 2.1 per cent in September.

Even with the lower exports, Canada’s trade deficit narrowed slightly because imports posted a sharper decline in September, dropping 1.7 per cent on fewer metal and non-metallic mineral product shipments, particularly gold. This follows a large gain of 9.2 per cent for the category in August. In volume terms, imports dropped 1.6 per cent in September.

“Overall, while this looks like a soft report, the declines in two-way trade were anticipated and not any worse than we had feared,” Andrew Grantham, economist in Toronto at Canadian Imperial Bank of Commerce, wrote in a note. “As such, this should have limited impact on our tracking forecast for GDP and for markets today.”

Imports rose 1.6 per cent on a volume basis in the third quarter, driven mostly by motor vehicles and parts, the statistics agency said.

Canada’s trade surplus with the U.S., its main trading partner, was largely unchanged in September as both exports and imports fell. The surplus decreased slightly to $4.8 billion, from $4.9 billion in August.

Exports of canola plunged 49 per cent in September, reaching the lowest level in more than 6 years, the agency said. Exports of the crop so far this year are down 22 per cent compared last year, mainly due to declines in shipments to China.

At the same time, Canada bought more Chinese goods, contributing to a larger deficit with the Asian country.

August’s trade balance was revised to a deficit of US$1.2 billion, after an initially reported US$955 million, the statistics agency said.