Canada’s job market began 2019 with an unexpected employment surge driven by jobs for youth in services and record private-sector hiring, a sign of strength in an economy facing several other headwinds.

Employment increased by 66,800 in January, Statistics Canada said Friday from Ottawa. That was driven by a 99,200 gain in services, which offset falling employment in goods producing industries. The gains were almost evenly split between full-time and part-time positions.

The picture is much stronger than anyone expected in an economy hit by stresses in the oil sector, weakening housing markets, volatility in global financial markets and waning consumer confidence. The report could ease some concerns about the extent of a current soft patch. Economists were forecasting only a 5,000 employment increase in January.

Even with the gains, Canada’s jobless rate jumped to 5.8 per cent last month, from 5.6 per cent in December. But the reason for the increase was more people looking for work -- a sign of strength that could indicate the jobs market is pulling new workers into the labor force. That could give the economy more room to run without fueling wage pressures.

The jump in January brought employment gains over the past 12 months to 327,200, the biggest year-over-year gain since 2017. 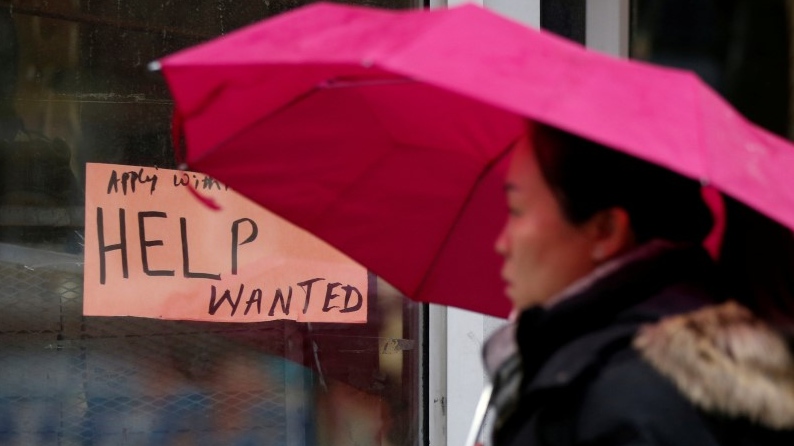 Are you tempted to seek a new job in the next year?

Another positive was a shift away from self-employment. The number of people employed by the private sector jumped by 111,500, the biggest one-month gain on record in data going back to 1976. The number of self-employed fell by 60,700.

Ontario, with an employment gain of 41,400, led the job surge among provinces.

There continues to be some weaknesses in the numbers. Wage gains remain depressed. Average hourly wages were up 2 per cent form a year ago, with pay for permanent employees up 1.8 per cent.

Alberta, which is struggling with slumping oil prices and production curbs in the sector, posted a second straight monthly decline in employment.

There were also broad-based losses among goods-producing sectors, including manufacturing.

Total hours worked rose 1.2 per cent in January from a year earlier, which is up from 0.9 per cent in December.