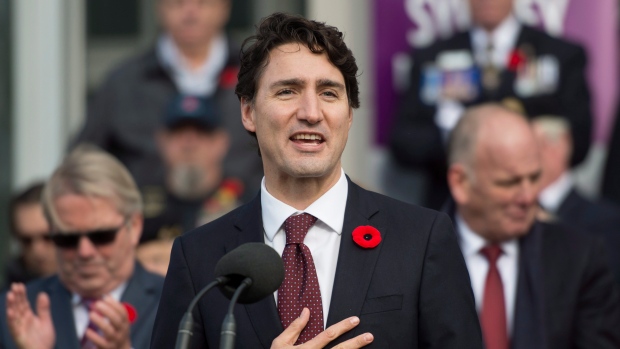 Prime Minister Justin Trudeau speaks at the official reopening of the Veterans Affairs office in Sydney, N.S. , The Canadian Press

Canadian Prime Minister Justin Trudeau on Thursday indicated he would stick to plans for a national price on carbon despite the U.S. election win of Donald Trump, who opposes measures to fight climate change.

If Trump walks away from international agreements to cut greenhouse gases, the carbon price could add to Canadian firms' costs and make them less competitive, according to critics.

Trudeau, who took power a year ago promising to do more to protect the environment, said last month that carbon pollution would cost $10 a tonne in 2018, rising by $10 a year until it reaches $50 in 2022.

"There is tremendous economic disadvantage from not acting in the fight against climate change," Trudeau said, when asked whether the carbon price would put Canada at a disadvantage.

"We know that putting a price on carbon pollution is a way to improve our response to economic challenges, to create good jobs ... and to show leadership that quite frankly the entire world is looking for," he said.

Trudeau has said the carbon price will help Canada make the greenhouse gas cuts it agreed under the 2015 Paris climate change accords. Official data, though, show Canada has little chance of meeting its targets, in part because of booming emissions from the energy sector.

Trump, who has said global warming was invented by the Chinese to undermine U.S. manufacturing, said in May he would pull out of the Paris agreement on the grounds it would hurt the U.S. economy.