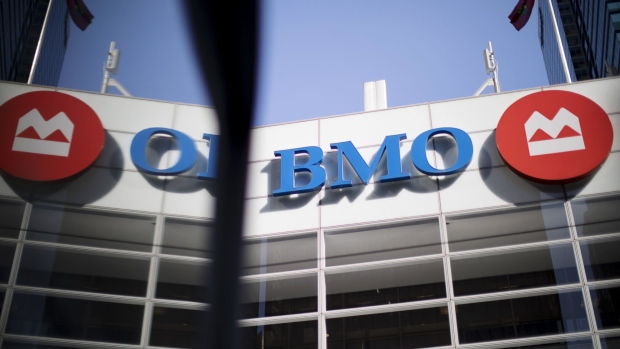 A Bank of Montreal (BMO) sign is reflected on a surface in the financial district of Toronto, Ontario, Canada, on Wednesday, July 11, 2018. Canadian stocks were mixed Friday as health care tumbled and energy rose, even as was still on pace for a weekly loss amid escalating trade war risks. Photographer: Brent Lewin/Bloomberg , Bloomberg

TORONTO -- When Robert Prichard welcomed shareholders to Bank of Montreal's annual general meeting on Tuesday, it was the first time the company's board chair had done so without standing before shareholders in person.

Prichard instead dialled into a webcast from the comfort of his home, where he explained the change was prompted by COVID-19 containment measures and an April court order granting the country's top banks and insurance companies the right to hold such meetings virtually.

"These are extraordinary times," Prichard said, when he opened the webcast. "We regret we had to make this decision because it is important for us to meet in-person with shareholders and to give shareholders the opportunity to address the meeting in person."

The format will be replicated by TD Bank Group for its annual general meeting on Thursday and with other banks over the next few weeks. The switch presents new opportunities -- and challenges -- for Bay Street and beyond, where Canadian businesses are watching some of the country's biggest companies handle virtual shareholder meetings.

Richard Leblanc, a professor of governance, law and ethics at York University, called it a "significant change," but warned that not everyone is happy with online-only AGMs.

"Investors are always concerned that management is driving the bus and they are controlling the dashboard, so they have the ability to manipulate or suppress concerns in a way that adversely affects investors and that, in the view of investors, wouldn't happen at an in-person meeting," Leblanc said.

"My response to that is management can also manipulate in-person meetings."

As an example, Leblanc pointed to meetings held in remote locations.

Virtual AGMs began in the early 2000s with U.S. companies, but there weren't any in Canada until 2017, she said.

Catellier has noticed hybrid AGMs -- in-person gatherings with electronic participation -- are more popular than virtual-only options, but virtual-only AGMs still have their perks.

More questions get tackled in virtual AGMs because time is better managed. And when it comes to asking them, many shareholders are more at ease, Catellier said.

"You can imagine that for a shareholder to come to the microphone in a large room with hundreds of people at the stage in front of the room can be intimidating," she said.

"In a virtual world, where you're typing up your question in the chatbox, it's a lot less intimidating and a lot more accessible."

To make shareholders comfortable and ensure even people with limited computer skills can participate, Catellier said Meridian plans to hold its AGM through a voice-only teleconference this year.

Companies moving to a virtual AGM should strive to emulate their usual meeting as much as possible, Leblanc says.

He recommends they do multiple dry runs of their meeting with entire boards and their virtual tech provider on hand. They should practice what to do in the event of long questions or disruptions, and shareholders should be given as much information in advance about the new process, he said.

"It tends to go off the rails for the institutional shareholders and the activist shareholders if they feel surprised in any way, so the preparation ahead of the meeting is crucial," he said.

There's a lot riding on the temporary switch because of how prominent the banks are, he added.

"The banks will set the tone for all the TSX companies, so it's important to get this right," Leblanc said.

If they do get it right, he predicts it could change the way annual general meetings are done forever, even though banks like BMO are pledging to switch back to their usual format following COVID-19.

"I would not be surprised if boards and management teams move to virtual only," he said. "It's difficult to go backwards."