Strategist says the loonie is the 'world's most frustrating currency'

A surge of more than 40 per cent in oil prices has helped make the Canadian dollar one of this year’s best performing major currencies. That resiliency could soon be tested if crude loses momentum.

Many forecasters appear skeptical about the prospects for oil to advance much beyond its current level, potentially sapping some support from the loonie. West Texas Intermediate was at around US$64 per barrel on Friday and the median forecast in a Bloomberg survey is for it to end the year around US$63.

“We don’t see the same impetus coming from oil prices,” said Bipan Rai, the North American head of foreign-exchange strategy at Canadian Imperial Bank of Commerce. “So it begs the question about whether we can rely on incoming data to really drive some support for the loonie. That’s still pretty much a wild card.”

The Canadian dollar has advanced 2.4 per cent this year against the U.S. currency, trailing only the British pound among its Group-of-10 peers. Oil has provided some buoyancy, but Canada’s domestic picture has been more cloudy. There is mounting concern about household indebtedness, home prices are dropping and growth practically ground to a halt in the final part of 2018.

While growth numbers for January were more upbeat and unemployment remains close to multi-decade lows, the central bank has become more circumspect. Bank of Canada Governor Stephen Poloz this month suggested that he is settling into a holding pattern on interest-rate policy. The global slowdown, coupled with a housing sector that is taking longer to adjust to tighter mortgage rules and higher rates, means the economy still needs the help of low borrowing costs, the BOC boss said.

“Canada’s got to worry about an additional factor that the U.S. doesn’t at this point, and that is the fact that our household sector is extremely leveraged,” said Rai, who is based in Toronto. “It could prove to be a much more prolonged slowdown given that you may see households deleveraging.” 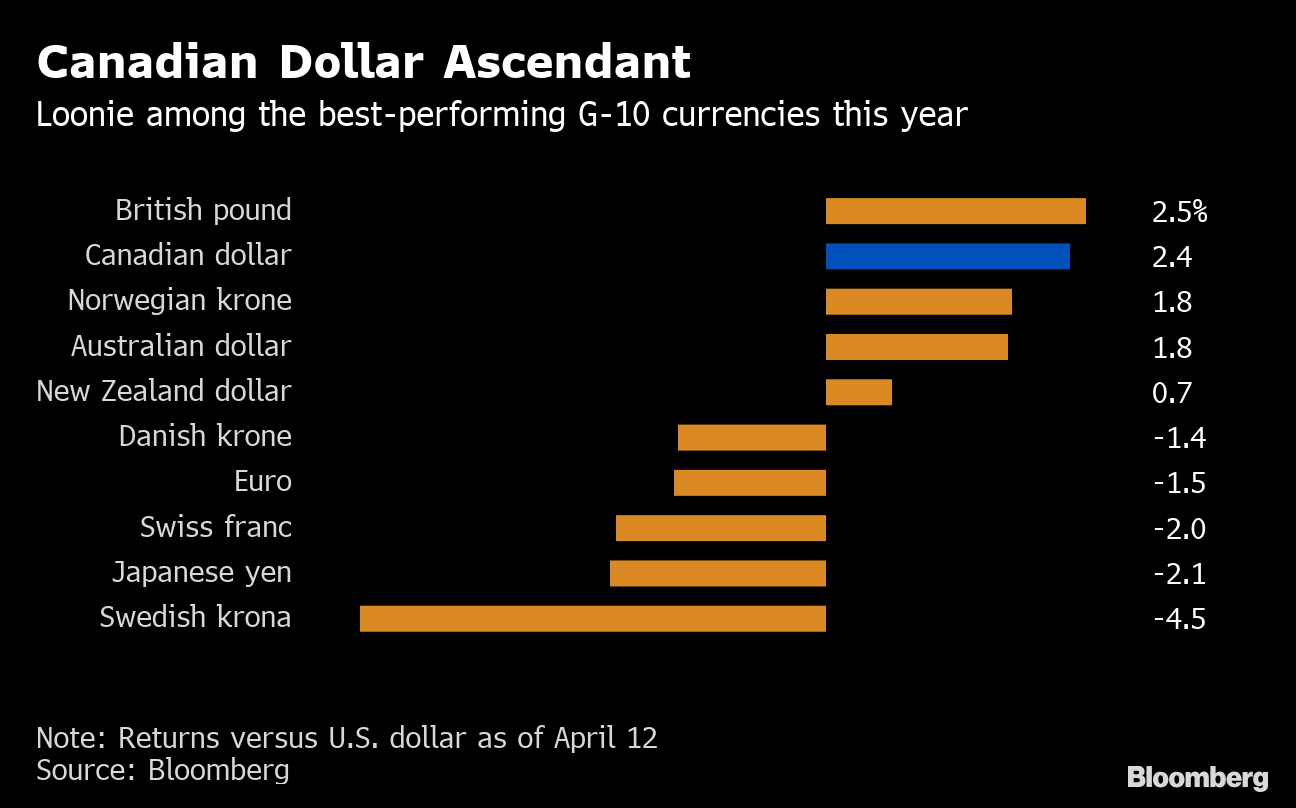 “We’re basically looking at a situation that is very difficult to find any positives for the Canadian dollar overall,” said Issa. “In fact, it’s probably going to continue to get worse.”

Not all observers are so pessimistic though. Bank of Montreal’s global head of foreign-exchange strategy, Greg Anderson, expects the loonie to rally to $1.30 per dollar by year end, while Scotiabank forecasts it will go to to $1.27.

Eric Theoret at Scotiabank sees a weak greenback environment fueling commodity-price gains and boosting Canada’s terms of trade, and says there’s room for improvement in the currency if crude prices continue to rise.

“If oil prices keep moving the way they are, it should allow the Bank of Canada to withdraw some of the accommodation that they are currently providing,” said Theoret.

Even if oil recovers, RBC Wealth Management expects the Canadian dollar to trade around its current levels until mid-year, with some modest softness taking it to a range of C$1.34 to C$1.36 per dollar by year end. Laura Cooper, head of FX solutions and strategy at RBC Wealth, sees limited scope for oil to bolster the loonie because pipeline constraints are helping to maintain a price gap between Canadian crude and the U.S. benchmark price. She’s also doubtful of any major shift from rate differentials, since both the Federal Reserve and the Bank of Canada are signaling extended tightening-cycle pauses.

“In the absence of a catalyst coming from rate dynamics or commodity prices, we see the currency trading broadly sideways in coming months,” she said.