Why franchising could be the answer to cannabis retail in Ontario

Sales of legal cannabis in Massachusetts are off to a strong start. Despite only two outlets being open in the New England state, there was over US$440,000 worth of marijuana and marijuana products purchased on Tuesday, the first day of legal sales. That generated about US$80,000 in taxes for the state and comes after a two-year-long process to get legal marijuana in Massachusetts stores. Additional outlets are expected to open in the coming weeks and months. With Massachusetts demonstrating the strong early demand for legal pot, some are wondering if New York state is next to legalize the drug.

Canadian-based cannabis product and brand company Origin House is doubling down on its boutique offerings, announcing a deal with Heritage Holding of California to finance the purchase of cannabis flower for packaging and distribution. The deal is worth about US$2.5 million and will sell the flower and pre-rolls to Origin House's distribution subsidiaries RVR Distribution and Alta Supply.

Cannabis’ legal beginnings began in the medical space as a way to treat pain and anxiety, among other disorders. But now, there’s growing research that shows that there are specific constituents in cannabis which may have a very profound impact in controlling the addictive effects of opioids, and possibly serving as a treatment for opioid dependence and withdrawal. In an op-ed by Western University professor Steven Laviolette, early research with rats showed that adolescent exposure to some of cannabis’ chemical components impact the brain’s dopamine pathways, which are are critical to psychiatric disorders like schizophrenia and somewhat responsible for the effects brought on by opioids.

A Canadian cannabis producer is staking its flag in Europe, in yet another sign of the growing interest in developing legal marijuana operations in the continent. Indiva announced Thursday it has acquired a cultivation and handling licence in Denmark in a deal worth about $2.6 million through a partnership with agricultural tech company AEssenceGrows. Both companies will work on building an indoor grow facility in Denmark with a fully automated aeroponic platform to produce “consistent, ultra-clean, premium pharmaceutical quality cannabis product.” Indiva is still developing its own facility in London, which it expects to compete by this spring.

"For those licensed producers that had aspirations of having a comprehensive retail framework and network across the province, those dreams will need to be shifted a little bit.”
— Frank Robinson, partner at Toronto-based Cassels Brock, on the opportunity to franchise cannabis stores in Ontario. 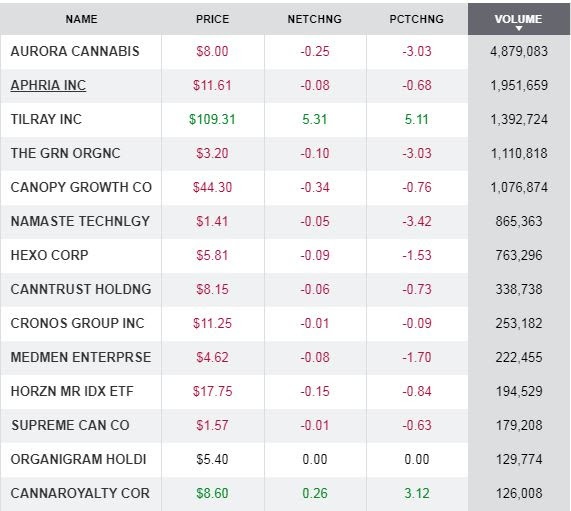