After weeks of speculation, the company that gave the world the Marlboro Man has finally found its pot partner. Altria announced that it will spend $2.4 billion for a 45 per cent investment in The Cronos Group several days after the Canadian cannabis producer confirmed it had engaged in discussions with the tobacco giant. The investment comes with a $1.9 billion warrant that will give Altria a 55 per cent stake in the company that can be executed over the next four years. Cronos now finds itself among a small pool of well-capitalized cannabis companies that can expand its offerings more effectively in Canada, internationally and, once it becomes federally legal, the United States.

Liberty Health Science - one of the companies caught in the crosshairs of a short sellers report published Thursday afternoon that alleged its officers were involved in insider self-dealing - issued a statement refuting the allegations. The company said the short sellers’ report “contains a number of factual errors and outdated information” and that the “authors stand to benefit financially by manipulating Liberty's stock.” Liberty’s shares were trading around 90 cents on the Canadian Securities Exchange on Friday, down from $1.41 a week ago. As well, in light of Aphria announcing it appointed a special committee of board members to look into the company’s Latin American transactions, BMO analysts suspended their price target and rating on the company’s shares.

Organigram to postpone AGM until Dec. 17

Organigram Holdings Inc. said it will postpone its annual general meeting to Dec. 17 to allow additional time for the company’s fiscal 2018 financial results to be filed. The company is within its regulatory requirements to delay the meeting as TSX Venture rules require its annual results to be filed within 120 days of year end, and with their annual results are expected to be released late next week, according to Beacon Securities. BNN Bloomberg recently reported that Organigram had a commanding 24 per cent share of the Nova Scotia and PEI recreational pot markets in the first month of legalization.

MedMen co-founders both announce buy back of $1.3 million in company stock

MedMen Enterprises, the CSE-listed company that launched several luxury-focused cannabis retail stores across the U.S., announced that its two co-founders have bought a significant amount of shares amid a downturn in the company’s stock. Co-founders Adam Bierman and Andrew Modlin purchased about $1.3 million worth of shares each on the open market on Thursday, the company said in a statement. The company’s shares have fallen as low as $3.40 since it announced it revised the terms of a bought deal last month to $75 million from a previously announced amount of $120 million. It currently trades around $4.05 on the Canadian Securities Exchange.

“An investment of this magnitude provides overall legitimacy to the industry as a whole.”
- Canaccord Genuity analyst Matt Bottomley on Altria’s $2.4 billion investment in Cronos Group 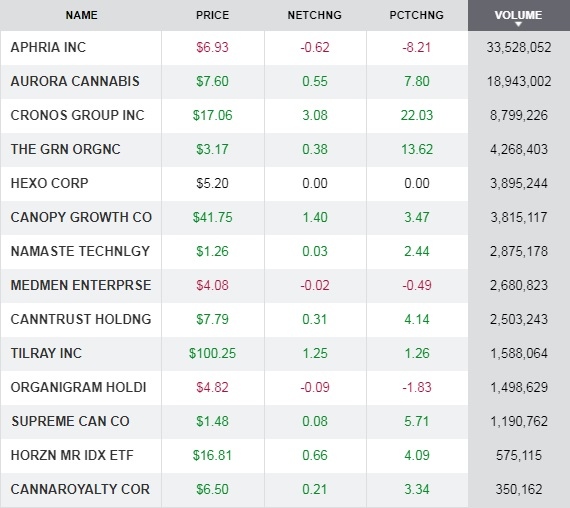