Canadian pot companies are beginning to face a growing threat from their southern neighbours. Bloomberg reports that the global advantage Canadian pot companies have enjoyed is on shaky ground given domestic sales limitations and exclusion from the huge potential of the U.S. market, as some U.S. multi-state operators begin to gain ground. That means Canadian licensed producers risk missing out on a market that’s estimated to be worth US$22 billion in legal spending by 2022. Canadian sales are forecast to reach US$3.8 billion by then. Meanwhile, several Canadian firms have established international operations in Europe and South America, but that isn’t really a substitute for U.S. growth, according to one leading cannabis investment banker tells Bloomberg.

Aurora Cannabis may soon have the biggest pot production facility in the world. The company said Wednesday it is boosting the size of its Medicine Hat, Alta. high-tech Aurora Sun facility by one-third to 1.62 million square feet as the firm seeks to ramp up production amid growing global demand for medical cannabis. The increased size would boost production to more than 230,000 kilograms of cannabis per year, Aurora said, adding it expects Aurora Sun to complete construction by the end of the year.

Average cost of a gram of Canadian pot up by 17 per cent: Statscan

A crowd-sourced survey compiled by Statistics Canada found that the cost of a legal gram of cannabis in Canada appears to be rising as illegal cannabis prices drop. The data, which was compiled using 1,129 new submissions, 936 of which passed the editing and screening process, found that the average cost of dried cannabis has gone up by more than 17 per cent since legalization. Canada’s national statistics agency said the unweighted average price per gram of dried cannabis from both legal and illegal sources combined was $8.04 post-legalization. That legal price, which includes online and in-store purchases, amounts to approximately 17.3 per cent more than the pre-Oct. 17 price of $6.85 which included black market and medical marijuana pricing.

U.S. attorney general William Barr would rather U.S. Congress pass new legislation that would legalize marijuana instead of the current approach where legal-pot states remain in conflict with federal law. Marijuana Moments reports that Barr told a Senate appropriations hearing the Justice Department is actively reviewing legislation that would accomplish that specific approach, and that it would like to add additional cannabis manufacturers for research purposes. “Personally, I would still favour one uniform federal rule against marijuana,” Barr - a traditional pot critic - said, “but, if there is not sufficient consensus to obtain that, then I think the way to go is to permit a more federal approach so states can make their own decisions within the framework of the federal law and so we’re not just ignoring the enforcement of federal law.”

$4.5 million
- The amount that Canadian cannabis producer Aphria invested in pot retailer High Tide, the company announced Wednesday. The investment is part of $10 million in convertible debentures to be used to fund more Canna Cabana, KushBar and Smoker's Corner stores across Canada. 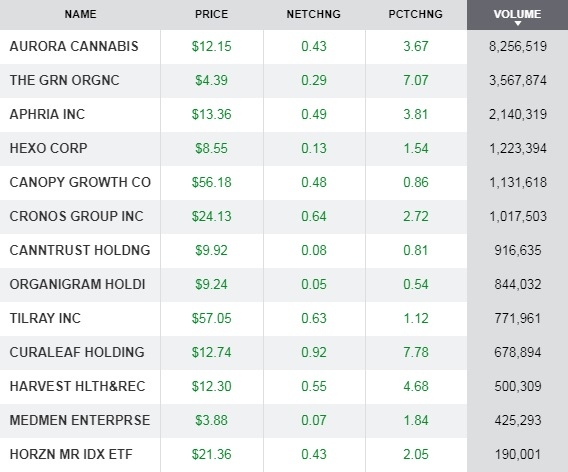