Recreational business is under pressure, but we expect more growth in medical: Aurora Cannabis CEO

With all due respect to Netflix's Stranger Things, it's easy to understand why Aurora Cannabis Inc.'s Chief Executive Officer Miguel Martin considers Canada's recreational marijuana market to be upside down right now.

"At least for the moment, it's completely irrational," Martin told BNN Bloomberg in an interview shortly after the release of Aurora's fiscal first-quarter results.

"When you have situations where with 28-gram discount flower, people are losing money, you've got to choose do you want to be profitable or do you want to have a 15 (per cent market) share?"

It's a stark change from the early days of legalization when Aurora was one of the biggest pot companies out there and then-CEO Terry Booth sought revenue growth regardless of how much it would cost it. And though it's still too early to say whether Martin's strategy is right, Aurora's stock is up almost 14 per cent over the past year as he tries to reshape the Edmonton-based cannabis company into a science-focused organization that sells premium cannabis products in both the Canadian and international markets.

That said, Aurora still reported an $11.9 million net loss in its first quarter, though it was better than the $101.4 million net loss reported a year earlier. Revenue for the quarter amounted to $60.1 million, down from $67.6 million in the same quarter the year prior. 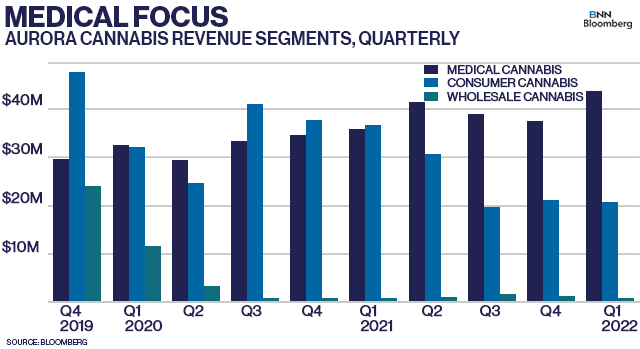 While its peers like Canopy Growth Corp. and Tilray Inc. traded lower over the same period and continue to fight for market share in the increasingly-fragmented Canadian cannabis space, Martin doesn't appear to be fazed with Aurora's share of the market sliding down around four per cent.

"When you have a lot of companies willing to lose money selling their products, that doesn't make any sense," he said.

Under Martin's watch, Aurora is promoting itself as a maker of premium products with extra care towards creating cannabis plants with one-of-a-kind genetics that it can leverage with intellectual property licensing to other producers while being unique enough to convince Canadian budtenders to recommend its offerings over its competitors.

It remains to be seen whether investors remain patient enough to see Martin's plan for Aurora be fully realized. MKM Partners Analyst Bill Kirk said in a note on Friday that Aurora's current growth from its international business and medical cannabis sales is not sustainable over the long term. He also criticizes Aurora's capital structure for having its finance costs higher than its gross margin and expects more carnage to be disclosed in coming quarters.

"Aurora is a shell of what it was supposed to become," Kirk said. "We still think: more inventory will be written down; more goodwill will be impaired; more assets will be sold for less than book value; and shareholders will continue to get diluted."

But Martin appears to be optimistic that investors will stick with Aurora as it executes on its plan to become profitable as a measure of its adjusted earnings before interest, taxes, depreciation, and amortization (EBITDA), which is on track to happen in roughly a year from now.

Surprisingly, achieving that profitability milestone will come even if Aurora's revenue doesn't grow that much from its current level. Martin said that's a possibility assuming its share of Canada's medical cannabis market remains intact - it has a leading 24 per cent portion of that segment - and its margins stick above 50 per cent along with the expected cost savings of about $50 million yet to be realized.

"We don't need revenue growth to get there," Martin said.

Hexo Corp. said Tuesday it plans to close three indoor production facilities it acquired in recent takeover deals. The move will exceed the $35 million in synergies it originally forecasted it would achieve through its acquisitions of Zenabis, 48North and Redecan earlier this year. The facilities were deemed to not be material to the company's integrated operations. The closures include both of the Ontario facilities Hexo acquired from 48North back in May, leaving only a handful of brands remaining from the deal. The move comes a week after Hexo announced its fourth-quarter results that disclosed a going concern about its looming debt load.

Cronos Group shares sunk Tuesday after the company said it would delay the release of its third-quarter results following a request from its auditor for more time to calculate a writedown of at least US$220 million of the company's U.S. business, which mainly sells and distributes CBD products. Cronos said it anticipates filing its third-quarter results within the next 60 days, but cannot assure that timing. The day before Cronos made the announcement, its shares soared following an article by New Cannabis Ventures that speculated, without evidence, that tobacco giant Altria Group Inc. would wholly acquire the cannabis company.

The next hope for U.S. legalization came to light late last week when Marijuana Moment reported that Nancy Mace, a rookie Republican congresswoman from South Carolina, drafted legislation aimed at descheduling cannabis. The draft is set to be released formally next week. It is expected that the bill will also create a 3.75 per cent excise tax on all cannabis sales, assign the Alcohol and Tobacco Tax and Trade Bureau to regulate cannabis in the U.S., and allow states to manage whether they would allow cannabis sales or not. While pot stocks collectively rose following the news, analysts offered more sober thoughts, with Stifel Analyst Andrew Carter stating the draft bill has "limited near-term prospects" and Cowen & Co. Analyst Jaret Seiberg noting the Senate doesn't have enough votes to pass similar bills.

Germany's odds of being the next country to legalize recreational cannabis improved this week after Bloomberg News reported the country's likely next ruling coalition is closing in on a deal to regulate adult-use pot. Details on how the sale and use of recreational cannabis would be allowed and regulated are still being hammered out by the Social Democrats, Greens and pro-business Free Democrats parties that will make up Germany's government. The European cannabis market is projected to be worth 3.2 billion euros (US$3.7 billion) by 2025, up from 403 million euros at the end of this year, according to Prohibition Partners.

In case you haven't noticed, there's a lot of pot shops in Toronto. The heavy concentration of cannabis retailers in the country's biggest city - 368 as of mid-October - has been highlighted recently in the Toronto Star and Bloomberg News, and has now seen two city councillors push for limits on pot shop locations in Toronto. That move is being opposed by Cannabis Council of Canada CEO and former Ontario Health Minister George Smitherman and questioned in a National Post op-ed. When asked recently if Ontario's Ministry of the Attorney-General would be amending any regulations, a spokesperson told BNN Bloomberg that "there are no plans to amend Ontario’s tightly regulated private cannabis retail regime." 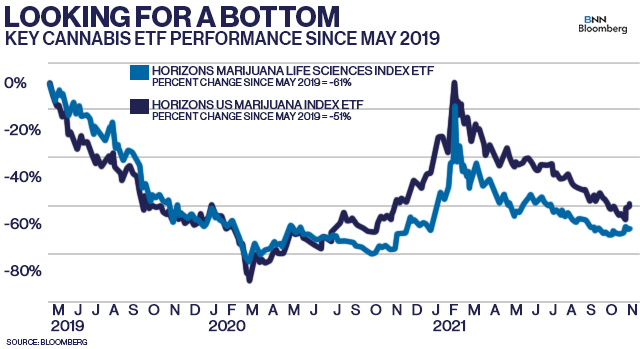 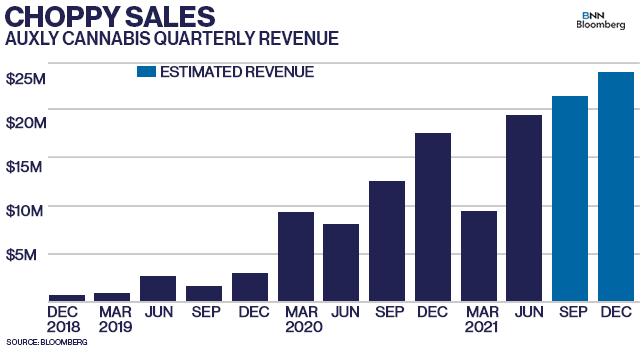 Auxly Cannabis reports its third quarter results prior to market open on Nov. 15, with analysts expecting $18.5 million in sales and an adjusted EBITDA loss of $2.5 million. Desjardins Analyst John Chu is more bullish on the company's quarter, expecting $23 million in revenue after noting in a report how the company's brands are resonating in the fickle Canadian cannabis market. The company has three vape brands in the top five which could be a boon in 2.0 product sales with more people visiting pot shops in person over the quarter, Chu said. While Auxly said it plans to reach positive EBITDA by the end of the year, Chu sees it taking one more quarter to hit that milestone. Meanwhile, Raymond James Analysts Rahul Sarugaser and Michael Freeman raised their target price on Auxly's shares in a Tuesday note to $0.65 a share and expect the company to report $26.8 million in revenue. "As the largest market cap cannabis producers lose market share, Auxly has been gaining," the analysts state. They add that they expect Auxly to soon capture 10 per cent of the Canadian market over the next three years.

-- This week's price is down 1.5 per cent from the prior week, according to the Cannabis Benchmark’s Canada Cannabis Spot Index. This equates to US$1,817 per pound at current exchange rates.

- The number of staff impacted by Hexo's decision earlier this week to close three production facilities.