Canadian cannabis producer Aphria will report its fourth-quarter results early Wednesday. Analysts polled by Bloomberg expect the company to report $146 million in revenue during the three-month period ended May 31, with $8.5 million in positive EBITDA. Cantor Fitzgerald analyst Pablo Zuanic said in a recent note that he expects Aphria to beat estimates on the back of continued recreational cannabis market share gains, while also providing a strong forecast for its upcoming fiscal year. Shares of Aphria have climbed more than 66 per cent since its last quarterly results.

Moncton, N.B.-based Organigram Holdings is releasing a new cannabis-infused chocolate, which one analyst believes will help the company's long-term strategy. Organigram said its Trailblazer Snax is the largest cannabis-infused chocolate bar currently available in Canada and contains 10 milligrams of THC. Jefferies analyst Owen Bennett said the product offering bolsters the company's "Cannabis 2.0" portfolio after a recent dip in sales. "Ultimately, a strong portfolio, with brands across a wide range of price points and product formats, will be the strategy that ultimately prevails," Bennett said in a report Tuesday.

The Democratic National Committee, the governing body of the U.S. Democratic Party, rejected a policy amendment that would support the federal legalization of cannabis, Marijuana Moment reported. The website said DNC delegates rejected the policy proposal by a vote of 106-50 with three abstentions. In additional to legalizing cannabis federally, the proposal was also aimed at addressing racial disparities in how laws are enforced, as well as stimulating the economy through legal pot. One of the delegates who voted against the proposal was California representative Barbara Lee, who is co-chair of the Congressional Cannabis Caucus and sponsored a pro-legalization bill in Congress, Marijuana Moment reported.

The number of people to be employed in the U.S. cannabis industry by the end of the year, according to MJBizDaily, a trade-news website​. 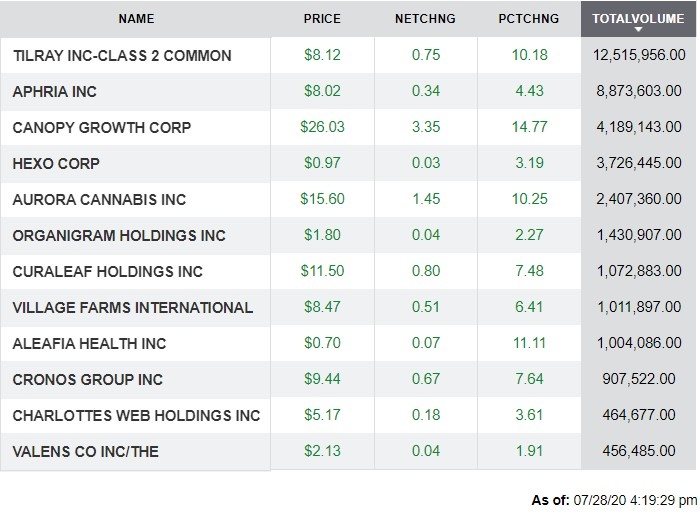