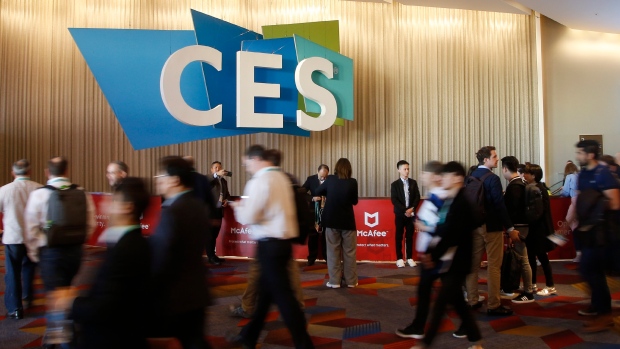 Attendees head to the convention floor on the first day of the CES tech show Tuesday, Jan. 7, 2020, in Las Vegas. , The Associated Press

LAS VEGAS -- A Canadian cannabis tech company has pulled out of the CES gadget show after being given constraints on how it could promote its products.

Nearly a dozen states allow the use and sale of marijuana for recreational purposes, and policies around the world vary. Broad marijuana sales began in Nevada in 2017. Las Vegas, where CES takes place, is now home to what's claimed to be the world's largest cannabis dispensary, Planet 13.

"We don't allow pornographic. We don't allow content where children are killed. We don't allow anything with vaping," said Gary Shapiro, president and CEO of the Consumer Technology Association, which organizes CES. "Marijuana has been a tougher one for us."

He said the show is waiting to see if marijuana becomes more legal, at least in the U.S.

"It is changing very quickly, and I wouldn't be surprised if we changed it sometime in the future as well," he said.

Keep Labs was awarded a prestigious CES Innovation Award in October for its "Keep" home cannabis storage device. It connects wirelessly to an app and lets users unlock the storage unit with a fingerprint or facial recognition. After CES placed limits on what Keep can show, the company decided it was better not to attend at all.

Keep was to be one of about 4,500 companies exhibiting at the four-day CES show, which opened Tuesday.

Planet 13 dispensary's marketing specialist, Brandon Zimmer, said he was surprised by organizers' decision, given that CES is supposed to be a showcase for tech innovations. He said cannabis tech is an exciting field, with lots of invention and new devices.

But Gartner analyst Werner Goertz said organizers are being smart in being cautious.