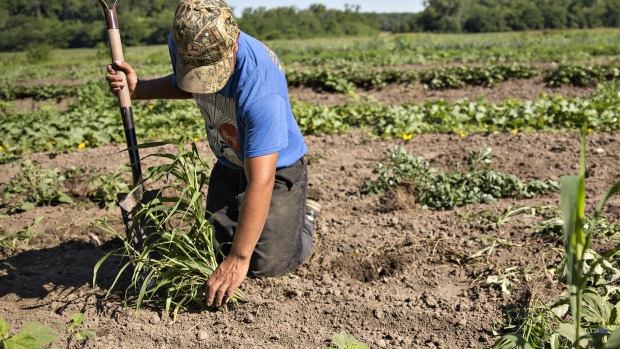 A farmer pulls weeds from a field , Photographer: Daniel Acker/Bloomberg

While other companies including Indigo Ag have started paying farmers for capturing carbon, Cargill says its reach from the field to finished products such as meat and animal feed give it an advantage.

“We are acting as a bridge between” farmers and consumer packaged goods companies, Ben Fargher, vice president of sustainability at Cargill, said by phone. “We need to produce food and deliver an environmental outcome together.”

Cargill’s program is part of a commitment to advance regenerative-agriculture practices across 10 million acres of North American land by 2030. Techniques include growing cover crops, which are planted after principal crops to help reduce erosion. So far, farmers have enrolled in the program for states including Illinois, Indiana, Ohio, Arkansas, Missouri and Tennessee.