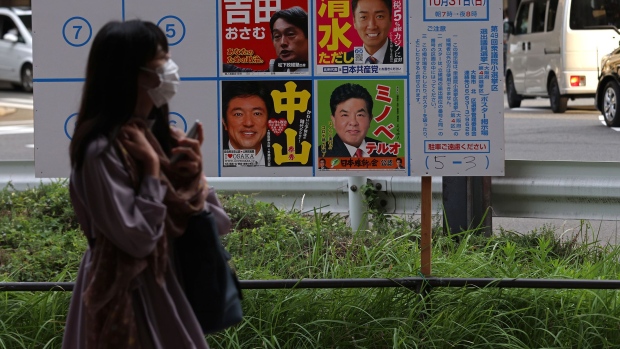 (Bloomberg) -- Japanese Prime Minister Fumio Kishida faces the biggest test of his fledgling administration with an Oct. 31 election that could determine how long he stays on as premier.

He’s pledging his ruling Liberal Democratic Party will increase wages, provide massive support for a Covid-battered economy and stand with its allies to speak out about China’s alleged human rights abuses. His ruling coalition is expected to keep its majority in the powerful lower house of parliament, but if it’s with a markedly slimmer margin, he could find himself hobbled as leader.

The main opposition Constitutional Democratic Party said the LDP’s policies aren’t working and it’s time to start increasing taxes on the wealthy and large companies to strengthen the social safety net for all. The group is also trying to win over voters by proposing policies such as allowing same-sex marriage.

With the clock ticking down to the vote, here are the policies being backed by the LDP, its junior coalition partner Komeito and the main opposition CDP: