The loyalty of Cathie Wood’s legion of fans may be finally waning, as the new year bloodbath in speculative technology stocks hands the star money manager a miserable start to 2022.

Investors pulled US$352 million from Wood’s flagship ARK Innovation ETF (ticker ARKK) on Wednesday, according to data compiled by Bloomberg. That was the biggest outflow since March.

The withdrawals come as ARKK languishes at the lowest in about 18 months. ARK Investment Management’s main exchange-traded fund dropped more than 15 per cent since the start of the year through Thursday as top holdings like Roku Inc., Zoom Video Communications Inc. and Teledoc Health Inc. got caught in the tech-share rout.

ARKK was edging higher as of 10:13 a.m. in New York as the sector managed to stabilize in Friday trading. 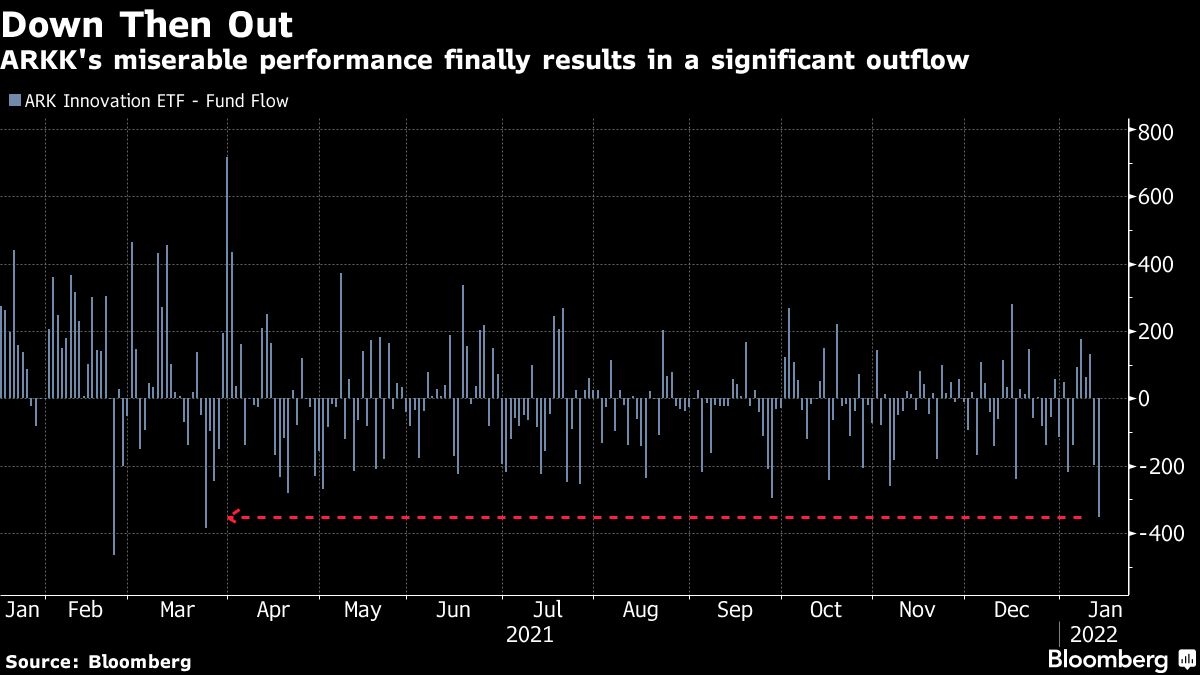 While the Wednesday flow is small compared to ARK assets overall -- its nine ETFs still boast about US$25 billion -- it marks a potential turning point for an investor base that until now has barely wavered in its support for Wood and the firm she founded in 2014. ARKK’s outflow was its third-biggest on record; the last time the fund lost over US$300 million it was trading 44 per cent higher.

Market conditions have been turning hostile to the disruptive tech companies beloved by Wood. Rampant inflation has spurred a hawkish turn by the Federal Reserve, spelling the end to pandemic-era stimulus and the ultra-low yields that helped pump up equity valuations. Investors are pulling back from speculative bets and growth firms whose profit potential lies in the future -- exactly the kind of stocks favored by ARK.

“Heavy outflows from a fund, active or passive, can be a sign that investors’ faith in growth and momentum-style investing is flagging,” said Russ Mould, investment director at AJ Bell. “Coupled with weakness in cryptocurrencies, meme stocks such as GameStop and AMC Entertainment and a strong rally in energy and financial stocks, it does feel as if the market mood is changing.”

ARKK is now down about 50 per cent from its all-time high in February last year. Yet many of its investors -- who poured billions in after the ETF returned more than 150 per cent in 2020 -- have stayed loyal even as they lost money.

Fund assets have declined by about US$15 billion since the peak, but only approximately US$1.1 billion of that was from net outflows -- the rest of the drop has been caused by performance. The ETF is now trading well below an estimate of its average purchase price since-inception. 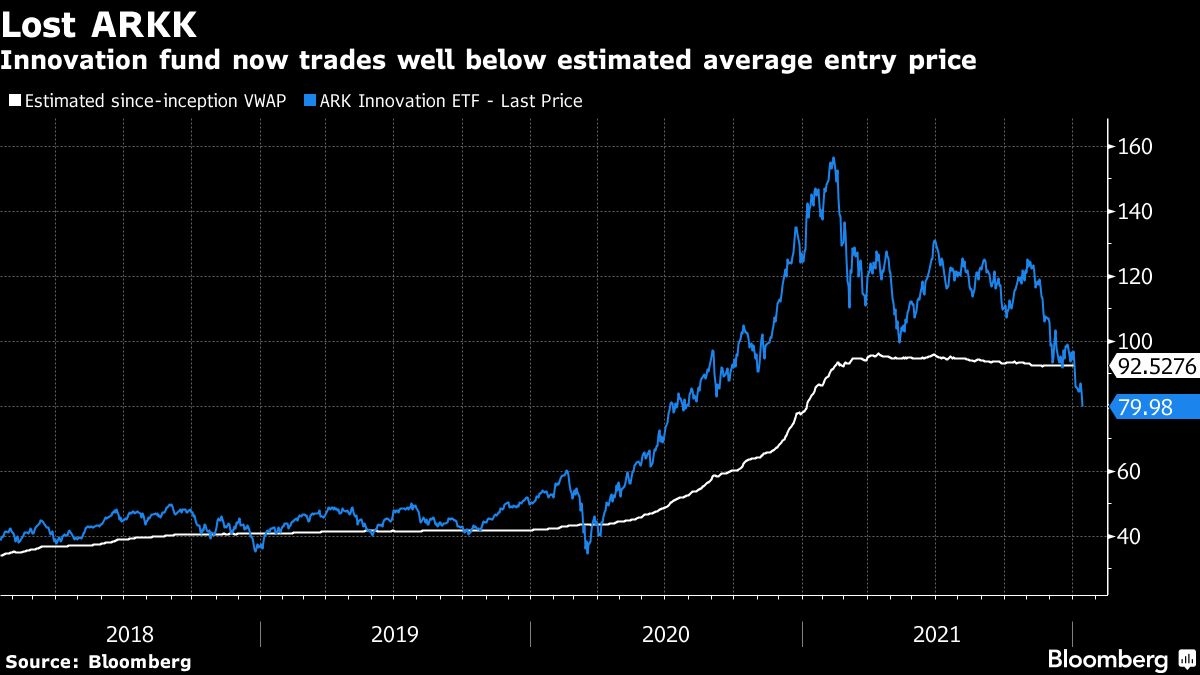 Wood’s repeated message is that the firm’s investment horizon is for at least five years, and that the potential of the innovative companies ARK targets is huge. It has regularly used pullbacks in its high-conviction names to increase its position, even as some on Wall Street fret over concentration risk.

The firm’s miserable run seems to be getting even worse in 2022, and every one of its U.S.-listed ETFs is down so far. The worst performer is the ARK Genomic Revolution ETF (ARKG) with a drop of 17 per cent through Thursday. The best is ARK Israel Innovative Technology ETF (IZRL), which was down 5 per cent.

Alongside ARKK, the other eight funds lost almost US$50 million combined Wednesday. The settlement schedule for the products mean that flow data arrives with a one-day lag.