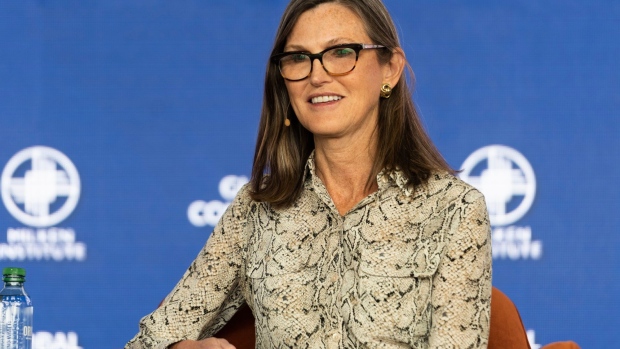 Catherine Wood, chief executive officer of ARK Investment Management LLC, participates in a panel discussion during the Milken Institute Global Conference in Beverly Hills, California, U.S., on Monday, May 2, 2022. The event convenes the best minds in the world to tackle its most urgent challenges and to help realize its most exciting opportunities. , Bloomberg

That’s a change from when Ark funds bought Tesla in 10 sessions from the last week of May to mid-June after the electric carmaker lost its crown jewel status in her main fund, a position it had held for about four-and-a-half years.

Wood’s leaning toward smaller stocks came after markets tumbled in the wake of hotter-than-expected US inflation and another jumbo rate hike by the Federal Reserve in September.

Ark ranks as the second biggest shareholder in UiPath and the fifth largest in Ginkgo, while Rocket Lab is a relatively recent addition to its funds.

Some of the smaller stocks have fallen a lot more than larger companies this year, which would have burnished their appeal amid any bargain hunting. For example, UiPath, Ginkgo and Rocket Lab are each down more than 60% year-to-date, compared to a 21% decline for both the Russell 2000 Index and the S&P 500 benchmark.

To be sure, Wood still bought Tesla shares on Monday following a decline in the aftermath of the company’s disappointing delivery numbers.