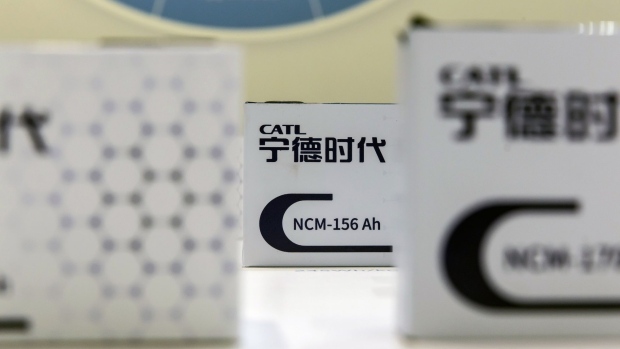 Vehicle batteries sit on display in the welcome center at the Contemporary Amperex Technology Co. (CATL) headquarters building in Ningde, Fujian province, China, on Wednesday, June 3, 2020. CATL's battery products are in the vehicles of almost every major global auto brand, and starting this month they'll also power electric cars manufactured by Tesla at its factory on the outskirts of Shanghai. Photographer: Qilai Shen/Bloomberg , Bloomberg

Contemporary Amperex Technology Co. Ltd., the world’s largest maker of EV batteries, is the mystery suitor behind a C$377 million ($298 million) offer for Vancouver-based Millennial, people with knowledge of the matter said, asking not to be identified as the information is private.

Millennial said Sept. 8 it had received an unsolicited, non-binding proposal of C$3.85 per share from a foreign lithium battery production company it didn’t name. The latest bid follows a July announcement by China’s Ganfeng Lithium Co. that it was buying Millennial for C$353 million, or C$3.60 per share.

Deliberations are ongoing, and there’s no certainty the suitors will proceed with binding offers, the people said. An official at Millennial declined to comment, while a representative for CATL didn’t immediately respond to a request for comment.

A representative for China Molybdenum said the company has always paid attention to investment opportunities for energy metals including lithium but declined to comment on a potential bid for Millennial.

Millennial notified Ganfeng that it considered the new offer to be a superior proposal and has given Ganfeng time until Sept. 27 to amend its existing agreement, according to its Sept. 8 statement.

The Canadian company, which focuses on exploring and developing lithium brine projects in Argentina, has 4.12 million tons of measured and indicated lithium carbonate equivalent, according to a June presentation.