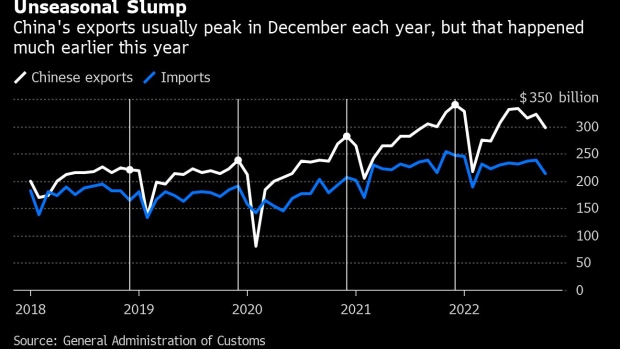 (Bloomberg) -- The UK economy contracted last quarter for the first time since early 2021 in what is likely the start of a prolonged recession, while prospects for the euro area also darkened under the weight of inflationary pressures.

In the US, consumer prices rose by less than forecast and suggested the Federal Reserve will be able to tone down its aggressive interest-rate hikes should inflation continue to moderate. China’s Covid-Zero policy and global recession concerns took a toll on the country’s two-way trade.

The UK economy shrank in the third quarter for the first time since the final lockdown of the pandemic as the cost-of-living crisis squeezed spending. Gross domestic product fell 0.2%, marking the start of what is expected to be a protracted recession. Britain is the only Group of Seven economy that has yet to fully recover from the pandemic.

The euro zone faces a grim winter as a recession bites just as double-digit inflation grips the region and war rages in Ukraine, according to the European Commission. Out of 15 euro-zone countries on which the Commission provided a quarterly forecast for GDP, every one of them is seen suffering at least one three-month period of contraction.

UK wage growth and hiring activity fell in October as the prospect of a recession prompted fresh caution among employers and cooled the job market.

Nordic inflation developments worsened the risk of the region’s looming recession as consumer price growth in Norway and Denmark hit levels not seen in decades. Norway’s inflation unexpectedly accelerated to 7.5% last month, the fastest pace since 1987, while in Denmark it rose to a 40-year high of 10.1% in September.

Inflation cooled in October by more than forecast, offering hope that the fastest price increases in decades are ebbing and giving Fed officials room to slow down their steep interest-rate hikes. Declines in the price gauges for medical care services and used vehicles restrained the core measure. Higher shelter costs contributed to more than half of the increase in overall CPI.

If last year’s holiday shopping season was characterized by empty store shelves and a race to meet demand in a healthy US economy, very different concerns have emerged just 12 months later: overabundance and sinking sales.

China’s exports and imports both unexpectedly fell for the first time in more than two years, with rising risks of a recession causing overseas consumers to buy less and domestic problems including Covid Zero controls and a housing slump hitting demand at home.

Japan’s household spending increased in September for the first time in three months, showing some recovery despite growing concerns over inflation weighing on households’ spending power. The monthly rise in real consumption offers hope that Japan’s recovery from the pandemic has some resilience, even in the face of accelerating inflation.

The Philippine economy expanded in the third quarter by more than projected, boosting the case for the central bank to tighten monetary policy further to contain inflation amid a sustained demand recovery.

Ghana’s inflation rate climbed more than expected in October, raising pressure on the central bank to continue increasing borrowing costs that are already at a more than five-year high. Annual inflation quickened to 40.4% in Africa’s second-largest gold producer.

Romania’s central bank lifted its benchmark rate by half a percentage point, after three larger increases, to the highest since 2010. Serbia boosted borrowing costs for an eighth month, while Poland left rates unchanged.

The world’s second-biggest buyer of gold among central banks last quarter believes there’s hardly such a thing as too much bullion. Uzbekistan has brought the share of the precious metal in its $32 billion reserves to almost two-thirds, in a reversal of a plan to cut it below 50% by buying US and Chinese sovereign debt.