As restaurants reopen in the U.S., Americans are once again eating food laden with more butter and cheese than most home cooks would dare to use. The extra consumption is sending prices higher.

Cheese sold on the Chicago Mercantile Exchange in 500-pound barrels is up 18 per cent so far this year. That’s the processed kind you’d top a burger with and find at most restaurants. Cheese sold in 40-pound blocks, the sort used in party platters and consumed in homes, has risen 9 per cent.

“We are seeing a very healthy trajectory on volumes” of dairy products going to restaurants, said Beth Ford, Chief Executive Officer of Land O’Lakes Inc. “It’s accelerated even more rapidly than we expected.” 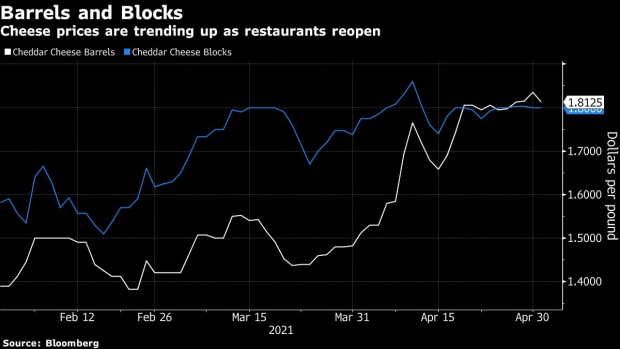 Restaurants are a major factor for how much dairy Americans eat, because they use so much of it on their menus. Last year during lockdowns, consumers bought more cheese at grocery stores, but it wasn’t enough to make up for the loss from restaurants. As a result, milk was dumped, cheese in storage in the U.S. reached an all-time high and uncertainty about demand led to wild swings in prices.

Now, both restaurants and grocery stores are buying cheese, a bullish sign, said Dave Kurzawski, a senior broker at StoneX. Americans ate 2 per cent more cheese in January and February over the prior year in the latest data available, Dairy Farmers America said.

There are global supply hiccups adding to the higher prices. Europe is producing less milk, while New Zealand is slowing down output, Gould said. Both are key dairy exporters.

Even more dining out is likely in the future, because Americans are starting to travel again and take road trips. That’s good for restaurants, which is good for cheese.

“When people are traveling more, they tend to go and eat out more fast food,” said Gould. “Cheese and butter both tend to be pretty high consumption items when you go to full-service types of restaurants, too.”