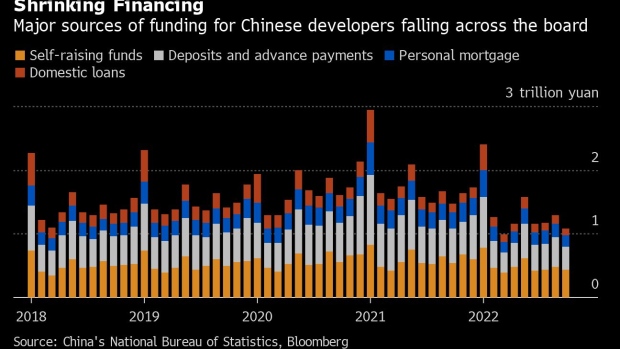 Home sales, land purchases, new housing starts and developer financing will all be key to showing how well the sector is able to recover in the coming year, economists told Bloomberg.

The market’s historic turmoil will make a comeback difficult, even with the slew of measures announced in recent months to address a developer cash crunch and boost housing demand. Covid curbs and other policy shifts have created short-term uncertainty, adding to longer-term challenges such as changing demographics.

“The market is still looking for a bottom,” said Bruce Pang, chief economist and head of research for Greater China at Jones Lang LaSalle Inc. “Any recovery will be mild and it won’t reach the previous peaks. The good old days are over, considering mega-trends on China’s population structure and urbanization pace.”

Here are some of the main indicators that analysts are looking at to gauge the strength of China’s real estate market:

One sign the market has found a bottom would be whether home sales volumes return to pre-pandemic levels in cities, according to Duncan Wrigley, chief China economist at Pantheon Macroeconomics.

He’s also looking for a rebound in existing home prices, along with indications that developers are starting to end discounts.

The strength of the recovery will depend on further changes to China’s Covid Zero policy, Wrigley said. He added that policies supporting lower-tier cities — such as the shantytown redevelopment program he said was key to the 2016-2018 recovery cycle — would be another factor.

National housing sales have been falling since July 2021, according to Bloomberg calculations based on data published by the National Bureau of Statistics. Year-on-year drops in both sales value and volume exceeded 40% in April, when the financial hub Shanghai was locked down due to a Covid outbreak.

All of the NBS real estate figures show year-to-date data, and are published roughly during the middle of each month. City-level figures are made available by industrial or financial information providers, which compile local government data on a weekly or sometimes daily basis.

A way to confirm the market is recovering is when the data starts showing three straight months of positive growth compared with the months before, as well as with a similar period in 2019, before the pandemic, according to Pang from Jones Lang LaSalle.

That’s partly because developers tend to try and make their earnings reports look better by offering discounts to homebuyers toward the end of the quarter, thereby boosting sales. The tradeoff though is that such actions can sap some demand in the following months.

Land acquisitions and new housing starts are important for assessing confidence among developers, along with the sustainability of any market recovery, according to economists.

Both indicators have been falling on a yearly basis for most months since early 2021 as developers ran into financial trouble. Since July of that year, the slump in new housing starts, for example, has deepened to double-digits.

Even with the latest policies announced by the government, it will be difficult for either land purchases or new housing starts to reach pre-pandemic levels, according to Wrigley.

“The policy support is focused on completing and delivering pre-sale homes, leaving developers with few funding channels for new projects,” he said.

“The data distortion is not a problem,” said Zhaopeng Xing, an analyst at Australia & New Zealand Banking Group Ltd. who expects China to gradually nationalize the property sector. “SOEs will dominate in the future.”

The total amount of funds received by real estate developers has been in decline since July 2021, according to Bloomberg calculations based on NBS data. Funding has plunged more than 20% year-on-year in every month of this year since March.

A recovery there may be a sign that the government’s policies — including steps to help builders get the cash they need to finish construction on projects that have already been sold to homebuyers, or to repay their debts — are having some effect.

“Property-related credit growth should improve as it’s something the government can control,” said Larry Hu, head of China economics at Macquarie Group Ltd.

Policymakers have pushed banks to provide more loans, and have allowed developers to tap more money held in pre-sale accounts, the biggest source of funds for the firms.

And the government late last month lifted some restrictions on corporate stock sales, after introducing a program in August to facilitate developers selling bonds.

Nearly 70% of developers’ cash comes from self-raised funds, which include debt and equity financing, along with deposits and advance payments from home buyers, NBS data show. Domestic loans, including bank lending, make up about 12%, while mortgage payments comprise around 16%.

--With assistance from Clara Yu (Gd) and Emma Dong.