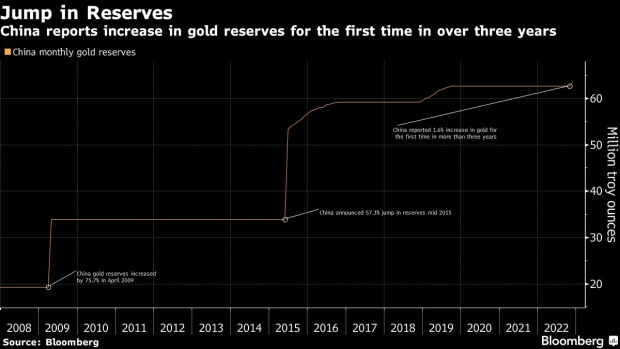 (Bloomberg) -- China reported an increase in its gold reserves for the first time in more than three years, shedding some light on the identity of the mystery buyers in the bullion market.

The People’s Bank of China raised its holdings by 32 tons in November from the month before, according to data on its website on Wednesday. That brought its total to 1,980 tons, the sixth-biggest central bank bullion hoard in the world.

The gold industry has been rife with speculation over the central banks behind nearly 400 tons of sovereign purchases during the third quarter. Only about a quarter of the buying was publicly reported at the time, causing market watchers to tout both China and Russia as potential culprits.

For China, the need to find an alternative to dollars, which dominate its reserves, has rarely been greater. Tensions with the US have been high since measures taken against its semiconductor firms, while Russia’s invasion of Ukraine has demonstrated Washington’s willingness to sanction central bank reserves.

The PBOC’s purchases may be part of a plan to diversify its reserves away from the dollar, said Giovanni Staunovo, an analyst at UBS Group AG. “Gold holdings in China as part of the total reserves are still very low, so there is probably room for further purchases down the road,” he said.

China has previously gone long periods without disclosing changes in its gold holdings. When the central bank announced a 57% jump in reserves to 53.3 million ounces in mid-2015, it was the first update in six years. It took another breather from the end of October 2016, before resuming reporting purchases in December 2018.

While central bank buying rarely drives sustainable gold rallies, it can provide an important pillar of support when prices fall. The precious metal has been under pressure this year from the Federal Reserve’s aggressive monetary tightening, though it has held up relatively well against moves in the dollar and Treasury yields.

“As deglobalisation accelerates, the non-G-10 nations are expected to ‘re-commoditize’ and ramp up gold holdings,” said Nicky Shiels, head of strategy at MKS PAMP SA.

Gold edged higher to $1,772.81 an ounce by 10:41 a.m. in London. Bullion had a shortlived rally back above $1,800 on Friday, and is down about 3% this year. The Bloomberg Dollar Spot Index was little changed. Silver gained, platinum fell and palladium was steady.

--With assistance from Jason Rogers and Eddie Spence.