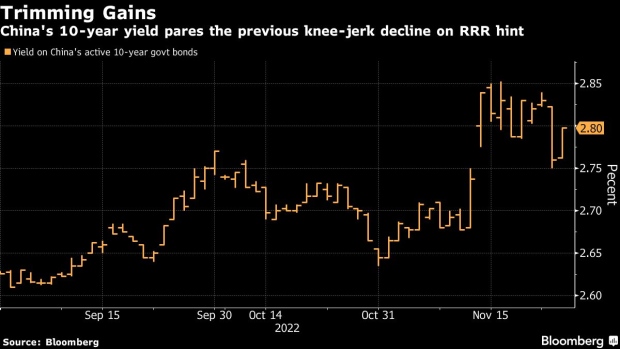 (Bloomberg) -- China’s bond bulls betting on a boost from imminent monetary stimulus may be disappointed, as Beijing could be nearing the end of its easing cycle amid growing concerns about inflation.

Sovereign debt resumed their downtrend on Thursday, with the yield on the most actively traded 10-year notes rising four basis points to 2.80%. It fell as low as 2.75% Wednesday when China said monetary tools will be used “in a timely and appropriate manner” to maintain reasonably ample liquidity.

Chinese securities have had a rollercoaster ride this month, as optimism fueled by a partial reopening of the economy collided with caution spurred by rising Covid cases. Risks are piling up for bond bulls after the central bank warned of inflation risks and extended only a portion of the policy loans that matured in November, citing sufficient liquidity.

“China’s easing is drawing toward a close given the expectation on the economic recovery in 2023 and concerns about the unintended consequence of the monetary policy divergence,” said Tommy Xie, head of Greater China research at Oversea-Chinese Banking Corp. “If traders consider this RRR cut as part of easing credit move, the impact may not be so visible.”

“Room for PBOC monetary easing is still limited given concerns over the yuan and inflation risks and because China has delivered other policies to stabilize growth,” Qin said. “Although government bond yields dropped sharply on the news, bond traders should take this opportunity to cut their positions.”

GF Securities analyst Liu Yu notes that in the past, such easing did not necessarily trigger a rally in bonds, with yields rising after the move in April when the 25-basis point reduction was the smallest ever seen.

Beijing is bracing for price pressures to quicken after it rolled back some Covid restrictions, including cutting the amount of time travelers must spend in quarantine and pulling back on testing. The central bank said last week it “will pay serious attention to the underlying possibility of rising inflation, especially changes in the demand side.”

The authorities have stepped up measures to arrest an economic downturn as they recalibrated the Covid Zero policy to minimize the economic and social damage and announced a 16-point rescue package for the property sector.

Citigroup Inc. said the State Council’s pledge to use monetary tools to an appropriate degree may suggest a modest 25 basis-point cut that will release over 500 billion yuan ($70 billion) of liquidity. How the central bank manages the upcoming maturity of medium-term lending facilities is also crucial, it added, with 500 billion yuan falling due in December and 700 billion in January.

“If the RRR cut is implemented to help funding market stay ample in the near term, it may keep supporting a steep curve, while long end yields may still see upward pressure with expectations of higher potential growth,” Citigroup strategists wrote in a note.