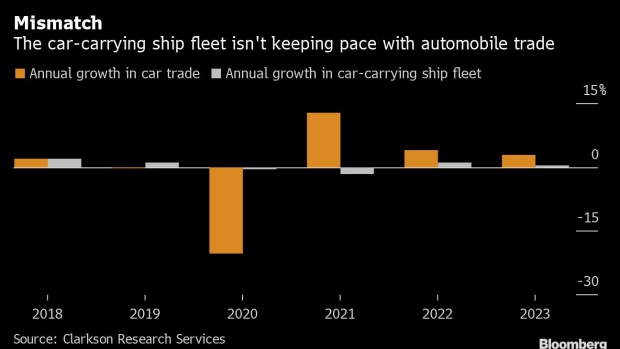 BYD Co. vehicles stand in front of a charging parking lot tower at the company's headquarters in Shenzhen, China, on Thursday, Sept. 21, 2017. China will likely order an end to sales of all polluting vehicles by 2030, BYD's Chairman Wang Chuanfu predicted, spurring the nation's leading maker of electric cars to consider supplying batteries to competitors during the powertrain transformation. Photographer: Qilai Shen/Bloomberg , Bloomberg

(Bloomberg) -- Two of China’s biggest automakers are so determined to ensure their cars make it from factories on the mainland to anyone who wants to drive them they’ve bought their own ships.

BYD Co., which only makes electric and hybrid cars, is going the extra length to avoid any last mile supply chain snarls, ordering at least six ships in October, each with the capacity to carry 7,700 cars, for 5 billion yuan ($710 million). State-owned SAIC Motor Corp., which already operates the world’s fifth-largest shipping fleet via transport arm SAIC Anji Logistics Co., has a tender out for seven new carriers that can each hold 8,900 vehicles.

With the vessels in question not expected to come online for several years yet, it’s a bold bet on lasting global consumer demand for Chinese cars. China recently overtook Germany as the world’s second-largest auto exporter, sending almost 2.6 million vehicles abroad in the first 10 months of 2022, eclipsing 2021’s volumes. Even October’s unexpected drop in demand for Chinese goods didn’t derail that upward trajectory with car and chassis exports growing 60% from a year earlier to 352,000 units in the period, or a record high $7.1 billion.

But while auto exports have surged, “the number of car carriers globally has barely increased,” said Xing Yue, the head of Clarksons Research Services in Shanghai, a unit of the world’s largest shipbroker. Shipping costs have skyrocketed and there’s now “lots of investment pouring into building new ships for vehicle transport because of this demand-supply mismatch.”

The lack of vessels is stretching an auto supply chain already worn thin by a scarcity of semiconductors, pandemic-related labor shortages and months of port congestion intensified by China’s Covid-19 lockdowns. Daily rates for vessels that can carry up to 6,500 cars (commonly known as roll-on/roll-off ships, or ro-ros) have surged to about $100,000 a day as of October, more than tenfold 2020 levels and the highest on record since at least 2000, according to Clarksons.

With all the last leg supply chain disruptions it makes sense for Chinese automakers to strike out on their own, according to Tobias Bartz, chairman and chief executive officer of Rhenus Logistics. Ships have become “such a scarcity,” he said on the sidelines of a conference in Singapore last month.

The shortage has meant that some vessels almost 30 years’ old are still operating instead of being scrapped, raising the risk of accidents. Trying to extinguish any lithium-ion battery fires that occur may also be harder.

Just a few years ago, China was mainly selling cars to developing nations in Africa and the Middle East. But the rise in electric-vehicle production has boosted made-in-China cars in Europe, which is now the biggest market for Chinese auto exports. China exported over 852,000 EVs in the first 10 months of this year, up from almost nothing a short while back. Over a fifth of those were Tesla electric cars produced in the US automaker’s Shanghai gigafactory.

To be sure, some aren’t entirely confident that buying ships now is the right decision.

“Car shipping costs are set to come down as the risks shift from backlogs to a glut in the car market,” said Craig Fuller, founder and CEO of supply chain market intelligence provider FreightWaves. With supply chain bottlenecks easing, “the risk is more on the demand side of the equation,” he said.

Until that inflexion point, Chinese automakers appear keen to control as much of the process as they can. Electric vehicle maker Nio Inc. and Chery Automobile Co. are also eying ship orders, local media reported last week.

Among Chinese brands, SAIC is the furthest along overseas. It sold 697,000 vehicles abroad in 2021 -- bolstered by the success of MG Motor, the British brand it acquired -- and is aiming for 800,000 this year. That’s a way off from meeting its annual shipping capacity, which stands at around 10 million vehicles, but meanwhile SAIC’s ships can and do serve other carmakers too, including Nio.

--With assistance from Ann Koh.