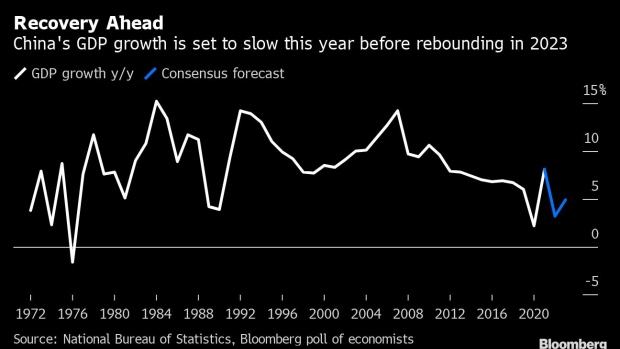 Containers at the Yangshan Deepwater Port in Shanghai, China, on Tuesday, July 5, 2022. Senior US and Chinese officials discussed US economic sanctions and tariffs Tuesday amid reports the Biden administration is close to rolling back some of the trade levies imposed by former President Donald Trump. Photographer: Qilai Shen/Bloomberg , Bloomberg

(Bloomberg) -- Senior Chinese officials are debating an economic growth target for next year of around 5%, according to people familiar with the discussion, as Beijing shifts gears toward bolstering the recovery.

Some officials argue that setting a goal at a relatively high level would help local governments shift the focus of their work away from Covid controls to boosting the economy, the people said, asking not to be identified because the discussions are private. Other officials are concerned a target of around 5% could be too ambitious, they said.

Beijing is adopting a more pro-growth stance now after months of economic turmoil triggered by record Covid outbreaks and a property market crisis — a downturn underscored Wednesday by the worst monthly trade data in more than two years.

The Communist Party’s Politburo, its top decision-making body, said in a statement on Wednesday it will seek a turnaround in the economy next year and significantly boost market confidence. The comments came hours before the government announced a significant easing of Covid restrictions.

“Growth is clearly more important for the leaders now,” said Zhang Zhiwei, president and chief economist at Pinpoint Asset Management. A growth target of about 5% “would be a signal to send this message to the public and local officials,” he said.

The gross domestic product target will likely be discussed at the Central Economic Work Conference, which usually takes place within a week of the Politburo’s December meeting. The GDP goal itself is only disclosed at the annual legislative meeting in March.

The Politburo on Wednesday signaled more stimulus could be on the cards next year, saying fiscal policy will be kept active with a focus on improving its efficiency, while monetary steps will be “targeted and forceful.” China will “push for overall improvement of the economy,” the official Xinhua News Agency said in a readout of the meeting.

Larry Hu, head of China economics at Macquarie Group Ltd., said the message from the Politburo meeting was “loud and clear: Zero-Covid is behind us, and growth would be the top priority for next year.” The signals suggest policymakers want to bring next year’s growth rate back to its potential of above 5%, he said.

The growth outlook for next year remains highly uncertain, given a likely surge in coronavirus infections and further disruption expected to the economy. The global economy is also at risk of falling into recession, and a recovery in China’s property market remains elusive.

A target of around 5% would be in line with the 4.9% median forecast for GDP growth for next year in Bloomberg’s survey of economists. Some banks like Barclays Plc and Nomura Holdings Inc. are more bearish though, expecting growth to come in at 4% or below.

Government-linked economists have also differed in their views. Wang Yiming, an adviser to the People’s Bank of China, called on the government to set a growth target above 5% for next year to send a strong signal that supporting the economy is a priority.

Liu Yuanchun, president of the Shanghai University of Finance and Economics, favored a “more prudent” growth goal of 4.5% to 5% to preserve policy room for handling possible future global risks.

China’s economy needs to expand around 4.7% annually on average in the 15 years through 2035 to achieve a goal set by President Xi Jinping in 2020 of doubling GDP over the period.

This year will mark the first time Beijing misses its GDP growth target — set at around 5.5% for 2022 — by a significant margin. Economists surveyed by Bloomberg estimate GDP growth will come in at just 3.2% this year, which would be the weakest pace since the 1970s barring the pandemic slump in 2020.

“A target of about 5% is not greatly out of line with what China can grow at the moment without running into economical or financial problems, especially after a very weak 2022,” said Louis Kuijs, APAC chief economist at S&P Global Ratings. He estimated China’s pace of potential growth right now at between 4.5% and 5%.

--With assistance from Lianting Tu.