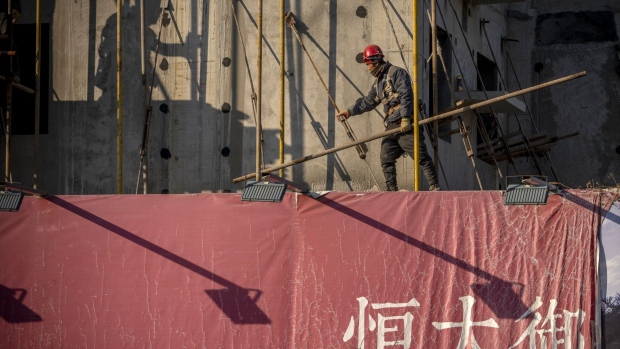 (Bloomberg) -- China’s home prices fell for a fourth consecutive month in December, as the credit crunch in the property sector showed little sign of easing.

A liquidity crisis at industry giant China Evergrande Group is spreading to competitors including Shimao Group Holdings Ltd. and Guangzhou R&F Properties Co. Falling prices may dissuade homebuyers concerned about the value of their assets, making it harder for developers to sell properties and generate much needed cash.

Recent moves by authorities to ease some of the restrictions on real estate funding have done little to boost the market. Home loan demand stayed weak in December, with households’ mid- and long-term loans, a proxy for mortgages, increasing the least since February 2020. Year-end sales campaigns by developers added to downward pressure on prices.

“In the year ahead, property could easily be the biggest growth headwind,” Larry Hu, head of China economics at Macquarie Group Ltd., said before the data release.

The intensifying home market downturn poses a challenge for policy makers, given that the sector accounts for about a quarter of gross domestic product. China is likely to post its weakest economic growth in more than a year when it releases quarterly figures Monday.

A growing number of economists are predicting the People’s Bank of China will further loosen monetary policy in the first quarter, partly to counter the housing slump. The central bank fueled speculation it will ease sooner rather than later with its vow in December to take “proactive” action.

“Tightening on the real estate sector probably needs to be loosened more to lift growth this year to above 5%,” Huatai Securities Co. economists led by Yi Hen wrote in a report earlier this month. “Fund raising related to real estate hasn’t bounced back strongly enough yet.”

In first-tier cities, prices for resale homes rose 0.1% in December month-on-month from a 0.2% decline in the previous month, the National Bureau of Statistics said. New home prices were unchanged month-on-month in Beijing and rose 0.4% in Shanghai.