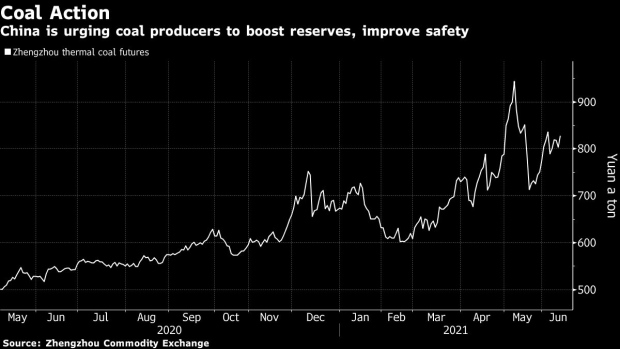 (Bloomberg) -- China’s authorities are accelerating efforts to build infrastructure to store reserves of coal after southern cities endured a new power crunch and with prices of the fuel still stubbornly high.

The coal sector must improve mechanisms to store supply and speed up construction of reserve capacity, Xu Wenbin, an official from China’s state planning agency, the National Development and Reform Commission, said at a meeting in Jining city, Shandong province, according to a CCTD report.

Thermal coal futures on the Zhengzhou Commodity Exchange traded 3% higher at 827.2 yuan a ton as of 4:59 pm in Singapore.

China has rolled out a raft of measures to tame surging prices of fuels to metals and food staples. Coal is winning additional scrutiny amid concerns over power security, with two dozen cities across China’s key industrial province of Guangdong forced to ration electricity last month. The crunch comes months after severe winter weather crippled power supplies across Northeast Asia.

Officials visited a port in Tangshan on Thursday to investigate if there has been any coal hoarding, according to Futures Daily. Authorities are also mulling a cap on prices, and three provinces have eased restrictions on some imports.

Following a spate of fatal accidents and with the Communist Party’s 100th anniversary celebrations approaching, safety inspections are also being made more stringent. The Ministry of Emergency Management said Friday it would raise its maximum fine for safety accidents to 100 million yuan ($15.7 million) and said it will shut output at firms that refuse to change unsafe operations.

“Although efforts to ensure supply security have been boosted, their impact in reality is not obvious,” Mysteel analysts said in a report Friday. “Safety inspections have become the normal occurrence, and new capacity needs time to come online.”