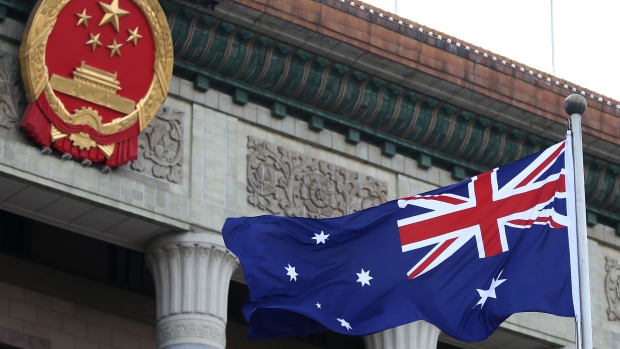 (Bloomberg) -- China is lobbying the Australian government for its support to join a multilateral regional trade pact -- despite the two nations being in a worsening geopolitical dispute that’s spilled over into economic reprisals.

“China’s accession to the CPTPP would yield large economic benefits,” Beijing’s embassy in Canberra wrote in a submission to an Australian parliamentary inquiry into broadening the Comprehensive and Progressive Agreement for Trans-Pacific Partnership. “China is committed to building a community with a shared future for mankind, and stands ready to work together with all the other parties to promote globalization and regional economic integration.”

China has this year reached out to Australia, Malaysia, New Zealand and possibly other nations for technical talks on details of the CPTPP, which was formed in 2018 despite the withdrawal of the U.S. under then-President Donald Trump, who described it as a “potential disaster.” The pact was originally conceived by his predecessor Barack Obama as as an economic bloc to balance Beijing’s growing power.

Since then, Australia has seen its relations with China nosedive in the wake of its call last year to allow independent investigators to be allowed into Wuhan to probe the origins of the coronavirus. Beijing has put ministerial relations in a deep freeze and implemented a range of trade reprisals on Australian goods including coal, barley and wine.

Such concerns are not addressed in the embassy’s submission to the Australian government. It says China should be allowed to join CTTPP due to its initiatives to increase imports, improvements to market access for foreign investment, and strengthening of intellectual property protections.

“The Chinese economy and the Australian economy are highly complementary with enormous potential in cooperation,” it says. It describes a bilateral free-trade deal between the counties in force since December 2015 as marking “a milestone for our trade and economic cooperation, creating favorable conditions for deepening, broadening and improving our bilateral economic relationship.”

The U.K. is also lobbying to join the CPTPP, having formally requested to join earlier this year.