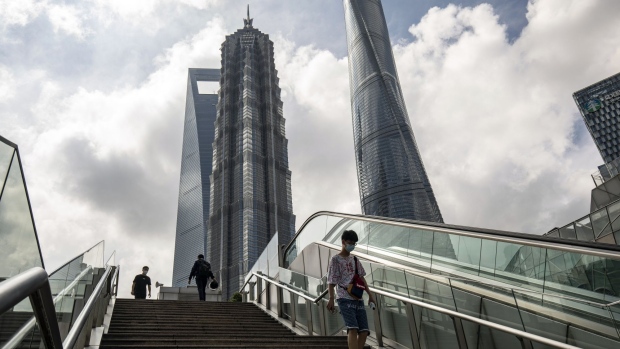 (Bloomberg) -- China has postponed an important annual financial forum in Shanghai this week, according to local officials, as the country battles a new wave of Covid outbreak.

The Lujiazui Forum, originally scheduled to be held in person in the Chinese financial capital Wednesday and Thursday, was delayed because the organizers needed to hold “further discussions on the key topics,” the Shanghai Municipal Financial Regulatory Bureau said in a statement.

It wasn’t immediately clear when or whether the conference will be held this year. A representative for China Banking and Insurance Regulatory Commission, which co-hosts the annual meeting with the Shanghai government and other financial regulators, didn’t immediately respond to a Bloomberg query on the postponement of the forum and reason for the delay.

The decision came as China is scrambling to contain fresh virus outbreaks ahead of a pivotal Communist Party congress slated for next month when President Xi Jinping is widely expected to secure a precedent-breaking third term in office. All 31 mainland provinces have recorded at least one local Covid case in the current outbreak, with local media Caixin saying that more than 30 cities have been fully or partially locked down.

The annual Lujiazui Forum is jointly held by the Shanghai government and financial regulators that also include the People’s Bank of China, the country’s central bank, and China Securities Regulatory Commission.

Titled “Role of Finance in the Steady Growth of World Economy,” this year’s gathering was supposed to be attended by regulators, financial industry leaders, as well as renowned economists and scholars from around the world, according to the forum’s website. Key topics included China’s financial opening-up, financial innovation, ESG and international financial cooperation.

(Updates with comment from local government in second paragraph.)