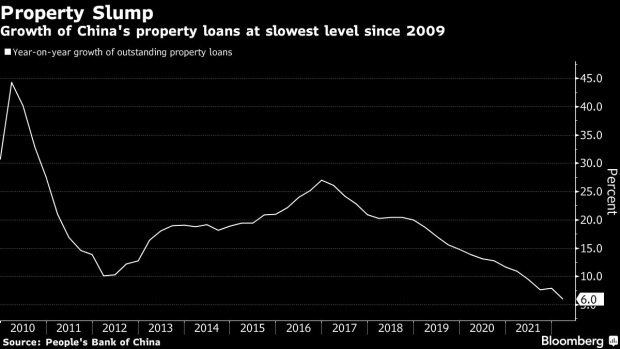 Apartments in the Cloud Atlas residential property, developed by Shimao Group Holdings Ltd., in Shanghai, China, on Saturday, Jan. 8, 2022. Shimao, a bellwether for financial contagion in China's embattled property industry, suffered its biggest-ever bond rout on Thursday after a creditor said one of the developers units defaulted on a local loan. Photographer: Qilai Shen/Bloomberg , Bloomberg

(Bloomberg) -- China’s property loan growth slowed to the lowest pace in over two decades due to the continued slump in the real-estate market brought on by developer defaults, virus lockdowns and weak consumer confidence.

Outstanding loans in the property sector grew 6% to 53.2 trillion yuan ($8 trillion) at the end of March from a year ago, the slowest pace of expansion since data began in 2009, according to a statement released Friday by the People’s Bank of China. The growth rate was down from 7.9% at the end of 2021.

Residents’ mortgages rose 8.9% to 38.8 trillion yuan from a year ago, slowing from the 11.3% increase at the end of last year, while outstanding property development loans grew after dropping for three straight quarters.

China’s home sales slump deepened in April, with preliminary data from the China Real Estate Information Corp showing an almost 60% decline in sales by the top 100 developers. The drop came with major cities such as Shanghai and Changchun under lockdown, and consumers stayed away even as purchase restrictions were loosened in more than 60 cities.

The average interest rate on new mortgages offered in March stood at 5.42%, down 17 basis points from the start of the year, the PBOC said in the statement. That decline comes after the five-year loan prime rate, which is a reference for the interest rate for many home loans, was cut to 4.6% in January.

The sector’s persistent downturn has prompted the central bank to step up its support for several distressed developers by loosening loan restrictions to ease a cash crunch last month, Bloomberg reported. That comes after the central bank called on banks to boost real-estate lending in the first quarter.