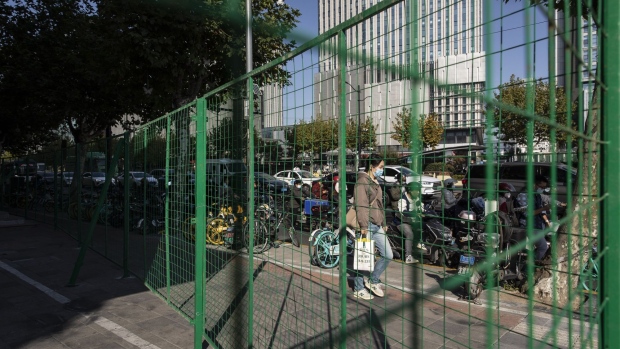 Wire fencing surrounds a neighborhood placed under lockdown due to Covid-19 in Shanghai, China, on Monday, Nov. 7, 2022. China’s daily Covid cases jumped to the highest in more than six months, as outbreaks flared across the nation and health officials declared the nation will stick with its strict virus controls. Photographer: Qilai Shen/Bloomberg , Bloomberg

(Bloomberg) -- Carmakers are opting to shutter their plants in China as Covid restrictions make it almost impossible to secure some components, deeming even the closed-loop systems promoted by officials as a way to maintain manufacturing during lockdowns untenable.

Volkswagen AG on Monday said a component shortage was the main reason behind a decision to halt production at a joint venture plant that it has with China FAW Group Co. in Chengdu and two of five production lines at its factory in Changchun. The German automaker doesn’t have an estimate for when output will resume and has no plans to create closed loops, a spokesperson said.

The unpredictability of China’s restrictions, especially as outbreaks reach record levels, means automakers such as VW are currently confronted with significant supply-chain uncertainties, people familiar with the situation said, asking not to be identified because they’re not authorized to speak publicly.

Without a stable and steady supply of components, it’s difficult to make any production plans, let alone move to closed-loop systems that would keep plants running, the people said. Chinese electric-car company Xpeng Inc. faces a similar challenge, according to a person familiar with its situation. Li Auto Inc. has delayed the delivery of two models because of component shortages, the Beijing-based carmaker said in a statement Monday.

A spokesperson for VW said its Chengdu and Changchun plants were impacted by Covid-related supply chain disruptions but “the overall supply to other facilities in China at the moment is quite stable.”

First used during the Beijing Winter Olympics as a way of keeping athletes and support staff separate from the wider population, closed loops were meant to be the panacea that would keep China’s economy chugging even as Covid restrictions limited movement. While they were effective in helping companies like Tesla Inc. restart output during the Shanghai lockdown in the spring, the systems have become less tenable the longer the pandemic endures, with workers separated from their families and the outside world long term.

Indeed Tesla only achieved its closed loop earlier this year because local officials helped coordinate with more than 100 suppliers, according to a person familiar with the situation. Provincial governments can vary in their power and heft, and Shanghai has been a consistent Tesla backer.

Conditions under a closed loop at the Chinese factory complex of Apple Inc.’s main global production partner recently seeded unrest that saw a mass exodus of employees and a violent clash with security guards. The situation at the factory -- known as iPhone City for its massive scale -- has laid bare how inviable closed loops are long term, further testing China’s already frayed Covid Zero strategy.

Mounting dissatisfaction among Foxconn Technology Group’s ranks now threatens to further disrupt production at the Zhengzhou plant that cranks out the majority of Apple’s iPhones for shipment around the world.

More broadly, public anger over China’s zero-tolerance approach to Covid is rising, with extraordinary street protests over the weekend. That may make companies even less willing to keep employees effectively locked up in factories for extended periods.

Honda Motor Co. also suspended its operations in Wuhan, the original virus epicenter, because of limitations around movement introduced in the area. Whether the plant will remain closed through Wednesday hasn’t been decided, a spokesperson said Tuesday. Honda also extended the suspension of operations at another plant producing engines for lawn mowers in Chongqing, southwest China.

Toyota Motor Corp., the world’s No. 1 carmaker, is adjusting production at some of its Chinese factories due to multiple factors, said spokeswoman Shino Yamada, declining to elaborate.

Contemporary Amperex Technology Co. Ltd., the world’s biggest maker of batteries for electric cars, said its plants are operating as normal in China so far.

Closed-loop systems typically require workers to travel from on-site accommodation to a factory and back, strictly avoiding contact with outsiders. VW used such a system earlier this year with mixed success. After locking workers in and then finding the supply of required auto parts also disrupted, VW resorted to scheduled group activities like voluntary garbage collecting and movie nights to keep people occupied.

--With assistance from Tsuyoshi Inajima, Masumi Suga and Danny Lee.