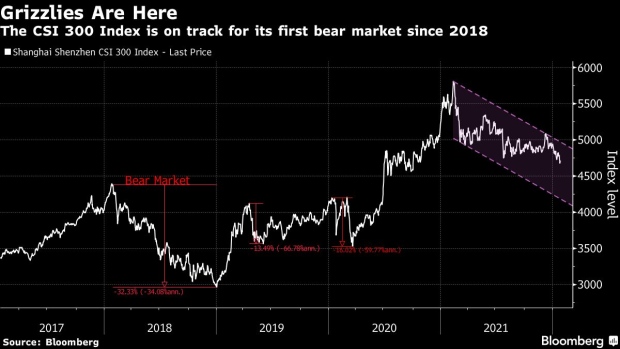 A pedestrian walks past buildings in the Lujiazui Financial District in Shanghai, China, on Tuesday, Jan. 4, 2022. A wall of maturing debt and a surge in seasonal demand for cash will test China’s financial markets this month, putting pressure on the central bank to ensure sufficient liquidity. Photographer: Qilai Shen/Bloomberg , Bloomberg

(Bloomberg) -- China’s equity benchmark is set to close in a technical bear market as the Federal Reserve’s hawkish comments added to investor concerns from the nation’s regulatory headwinds.

The CSI 300 Index slid as much as 1.6% on Thursday, taking losses from a peak in February to 20%. Zhejiang Sanhua Intelligent Controls Co. and Shenzhen Inovance Technology Co. led declines on the gauge.

The index was among the few global stock gauges to be spared from plunging into a bear market during the pandemic, but has been caught up in a broad selloff this year. While an increasing number of banks and money managers see Chinese assets as an alternative destination as the Fed tightens, Beijing’s regulatory uncertainties and the nation’s slowing growth are clouding the outlook.

The gauge’s move toward bear territory comes at a time when Beijing is trying to maintain stability in its financial markets ahead of Lunar New Year holidays and the Winter Olympics. A string of reports from China’s state-backed media this week called on investors not to panic as the nation’s equities will show resilience thanks to looser monetary policy.

The last time the CSI 300 Index entered a bear market was in 2018, when investor concerns about China’s trade war with the U.S. took a toll on equities.

The People’s Bank of China has pledged to offer support for the slowing economy, with policymakers cutting key interest rates in recent weeks. The divergence in monetary policy paths between the U.S. and China has been a key factor behind bullish calls on the Asian nation’s equities.